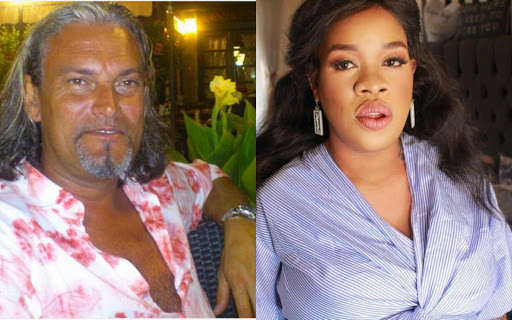 Many have been speculating that socialite Bridget Achieng's newborn son is biracial.

This has forced her to come out to set the record straight about her baby daddy, whom many have been speculating is white.

The Nairobi Diaries reality star, who in past interviews said she spent close to Sh3 million on skin lightening, addressed rumours that socialite Pendo's mzungu ex-lover Joseph Koener was her baby daddy.

During her live video, a fan asked:

Is it true that Pendo's mzungu is your baby daddy?

Joseph is married to my best friend. My baby is Nigerian.

Taking to Mpasho.co.ke about his relationship with Bridget, Joseph Koener said:

Bridget is a good friend to me. I'm a godfather to her baby boy. She is also the best friend to my woman. I recall clearly last year she and my woman merged their birthdays together and in my opinion, she has succeeded in all that she does. She is very trustful and faithful in her ways.

I only got to meet her after I had met some of the Nairobi Diaries crew, and honestly, she is the only one who is true to herself. She is making a brand out of herself.

Joseph, whose engagement to Pendo he termed a stunt, gushed about his new woman. He said:

She is not new. I have known her way before and she was amazing from the beginning. Sharp, smart, loving, humble and very kind.

She chooses not to be in the limelight but enjoy her life on the calm side, that's why I didn't involve her in Pendo's drama at all, but she got to know and she supported me.

In a previous interview with Mpasho.co.ke, Joseph said the proposal was a commercial deal, which Pendo refuted.

SO I PROPOSED TO PENDO A DEAL FOR A CERTAIN PAYMENT WHICH SHE WOULD SHARE WITH HER BOSS JANET MWALUDA FROM NAIROBI DIARIES. JANET NEEDED TO BE PAID AS PER PENDO’S INSTRUCTIONS. THE PAYMENT WAS ROUGHLY OVER SH250,000. WE AGREED I WOULD PLAY THE ROLE OF HER FUTURE FIANCEE WHICH WOULD BE A HEADLINE IN NAIROBI DIARIES SHOW AND JUST LIKE THAT, I WAS CONVINCED THAT THE MOTHER OF MY DAUGHTER WOULD HEAR THIS AND CONTACT ME. THE PLAN WORKED AND SHE CAME OUT OF HIDING AND CONTACTED ME AS SOON AS THE PROPOSAL VIDEO WENT Viral.