Tialala Is Irrelevant? But You Think Singing 'Nishike' Is. Kubaffff! Sauti Sol Hilariously Trolled By KOT for calling them 'Uneducated' 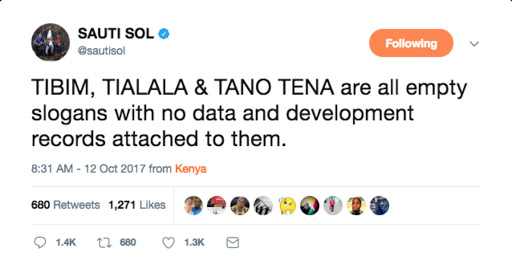 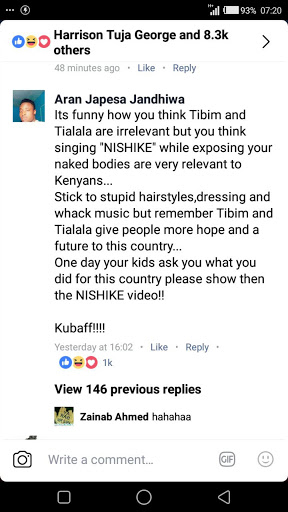 Sauti Sol are fresh off a nasty social media fuelled beef with King Kaka. Now they have picked new opponents to trade blows with, sycophantic followers of both Nasa And Jubilee.

Sauti Sol's collective ballsack must be the size of two SGR trains, because how would you post something like this.

"TIBIM, TIALALA & TANO TENA are all empty slogans with no data and development records attached to them," Sauti sol tweeted.

Here is a screenshot just so you are sure they actually hit the "tweet" this button.

And on Facebook they called a majority of Kenyans "uneducated".

TIBIM, TIALALA & TANO TENA are all empty slogans with no data and development records attached to them. A critical mass of this country is simply uneducated that's why these things turn us on. But to be honest why aren't these battles about manifestos and track records? In this country as long as you have money you can fart and people will cheer.

Kenyans, trolls and anyone who had something to say chimed in with their harsh opinions.

J O E L: Wat can men who go to saloon and walk with mirrors in the pocket tell Kenyans?#NASAHao.

Sayyid_Macharia: I totally agree with you. I mean my candidate is @EAukot but what are these slogans about really?

Owise Owino Owano: For the first time someone decided to speak the truth yet a whole nation condemn them. The same nation that cheers when our leaders fight instead of condemning it. For the first time an influence standsnup and speaks and people insult them.

Vika Kavii: Has someone told you that you sing funny, cheap, uninteresting music.

Skeeter Kerubo: The worst kind of people are the 'neutral' and 'fence sitters'. In most countries, musicians were in the front line castigating bad governance. Franco Makiadi, Fela Kuti and the likes. Take a stand and stop being neutral. #TakeAStand !

Billy Agwanda: Drink your wine pole pole, meet girls and tour the world. Let the people who fight for your freedom do so you ungrateful clowns.

Julius Abok: Actually, the adult literacy levels in Kenya stand at 61%, the highest in Sub-Saharan Africa, and one of the highest on the African continent. Secondly, this is typical middle class disillusionment and disenfranchisement. Looking down, on your high horse, at people who are struggling to have their voices heard. People (whichever side of the political divide) who want their issues solved for the betterment of theirs and their children's lives. Yes, politics ought to be about manifestos and track records. But people have the right to be heard. irregardless of their choice of leader or political leaning. Don't make this about money. You lot are out of touch with reality.

Phannie A Kwegah: Ayayaayayaaa Bana befwe let's just stick to music. Abort mission. Abort. These are uncharted territories you've never swam in. You will drown. Sharks will devour you unforgivingly for your wanton show of ignorance. Abort mission. Muuliranga?? Tsankyu.

Misare Njagah: You just called your fans whose votes you need too to win whatever awards you get nominated for uneducated. Did you ask for manifesto before going to dance with them at state house? stick to making music boys

Joseph Muchene: The only musician who can lecture us is Octopizo coz he has tried with his peace crusade. The rest just get~out~of here men!

Khalid Idi: What a condescending post! Above all, it captures the attitudes of the Kenyan bourgeoisie. You eternal fence sitters! It is the masses you write off as the “uneducated” who put their lives on the line for multi-party politics, term limits, the new constitution and the freedoms that secured your basic rights. You, eternal fence sitters, sit in Java—cappuccinos in hand—and lecture the country on the value of capital and "order." No mention of the 40 odd people who just lost their lives in an attempt to rid the country of the corrupt regime you cartoonishly sang and danced for.

Nick Khatete: You stay in lavingtone.... next to kawangware but I never saw you guys engaging the youths there to embrace peace,before and after the elections, octopizzo has been doing that in kibera...... we need actions!!! not empty words here, you are there on top for a reason, you and your fellow king kakas and kina og, do something!!! posting 1000 words here won't help, mamorio hawana WiFi mtaani.... thnks.

Isaiah Manyala: Did you just insult our intelligence Sauti Sol? Stop commentating on things you can't argue out. I just deleted your whole album because of this! You've been feeling so proud for the last two weeks sana! Kenyans you're insulting are the same you'll come and ask for views! Am offended! Time for Naija until you respect Kenyans!

Joseph Sejo: Take your nuetrility to siberia.Sauti sol stands for nothing,has done nothing for the society.sees no evil and hears no evil,all you do is travel abroad and party around, you don't know what acommon mwanainchi is going through.you are not aware there was campaign and adebate and both parties explained what they want to do for kenya.yet here you are with acondesenting attitude oblivious of the situation the country is in.your fellow artists are fighting for democracy and tyranny in their countries,be it Eminem or bobi wine,mark you they are far much better artists than you.yet they have no pride.incase you didn't know,this silly political slogans are the once that gave you freedom to express yourself and get money conning kenyans with stupid music with funny lyrics.stay out of political agitation or the wave will sweep you.

Benson Mutinda Msafiri: I just love how Kenyans are reacting to this non sense post. We make you celebrities and you abuse us simply because you think we are stupid. Lanes wasee lanes..

Patrick Karisa: I used to respect you guys but ever since you gat some money in your pocket you think that you can fart and people will cheer cz that is exactly what u did FART.

Kitoko Mgenge: Actually Napenda hii statement...Do you guys know that taking sides is the beginning of political #apocalypses.....everyone is doing it wrong. This is kenya si central na Nyanza.

Wallace Lee Palmer: Sasa mnajiona mko juu ati juu mmefika international status....kina diamond they never mix with politics there and he's doing pretty good....they just stick to their thing....so you call your fans stupid and we voted overwhelmingly for them including you...a very hypocritical post....meanwhile people are fighting for reforms in the government and you call that whack...You think they are stupid...fuck you guys

Mystic Venus: The masses have never thirsted after truth. They demand illusions, and cannot do without them. They constantly give what is unreal precedence over what is real; they are almost as strongly influenced by what is untrue as by what is true. They have an evident tendency not to distinguish by the two.” -Sigmund Freud