The comedian shared the news of their loss yesterday evening

• Her and Eric have been dating for over an year. 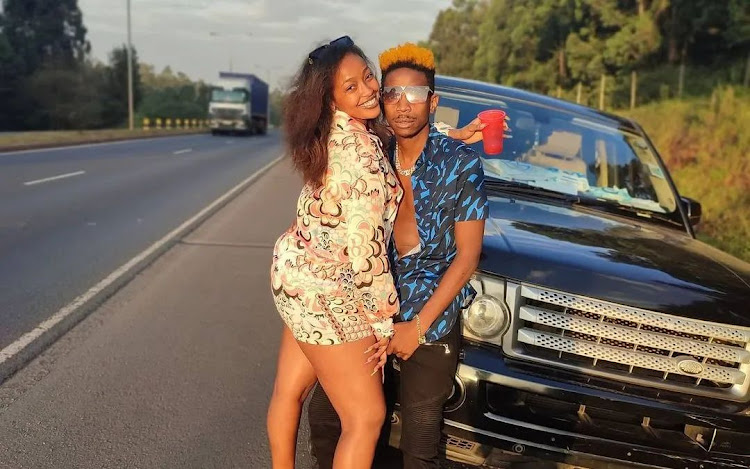 Barely a day after losing her unborn child, Eric Omondi's girlfriend Lynne has taken to social media to mourn her loss.

"To My Angel🥺👼I still can’t believe you’re gone...." started off the commercial model .

She went on to add that even though it had been a short period of time she was thankful to have experienced human life growing inside her.

"I’m thankful I got to have you for those 8 weeks you were inside me." Wrote Lynne.

The content creator finished off by emotionally adding that her heart was breaking over the fact that she would not get to meet her child.

" I’m sooo sorry I won’t be able to see your sweet face or massage your tiny feet. I Will Forever Love You😭❤️🕊️" the last of Lynne's post read.

During the day Eric had posted a video of Lynne looking all weak and emotional on the hospital bed and captioned it, "at least someone  is smiling."

Sharing an emotional video of Lynne hysterically crying on the floor next to a hospital bed, Eric went on to break the sad news to the public.

Last night was one of the Longest nights in my life 😥" started off the comedian.

He went on to add that they together with the medical staff had done everything they could do to save their unborn child but to no avail.

"We fought for over 5 hours to try and save our little Angel but God had other plans," Eric noted and revealed that he and commercial model Lynne had been expecting a child.

Eric finished off by adding that even though they'd not been able to meet the child it had already impacted their lives in ways untold.

"We never met you but we sure felt you and will Forever Love you🕊🕊🕯🕯. Respect to all the Women, no man on earth has that kind of strength. @l.y.nn.e stay strong...It is well." His post read.

Singer Kambua has penned an emotional message to Nigerian singer Davido after he lost his three-year-old son.
Entertainment
2 months ago
WATCH: For the latest videos on entertainment stories