• A post by a local blog alleged that Boniface Mwangi had testified against former Machakos governor Alfred Mutua.

• He is alleged to be pushing the former governor to give child support to his ex.

It seems that every time Lillian Ng'ang'a/Juliani and Alfred Mutua trend, Boniface Mwangi will inevitably be drawn in.

The latest example of this was when a certain Facebook tabloid reported that the activist had allegedly testified in court yesterday in a case involving Lillian Ng'ang'a and Alfred Mutua.

"Boniface Mwangi has allegedly testified in court today in a suit filed by Lilian Ng'ang'a over properties she jointly owns with Alfred Mutua," the post caption began.

The post added that the famous photojournalist had said that the feud between Lillian and Alfred had left the former air hostess insolvent.

And that wasn't the worst part of the post caption! It claimed that Boniface had asked the court to make force the former Machakos governor to pay child support for Juliani's child with Lillian!!!

"Boniface Mwangi says Mutua has bankrupted Lilian and is, therefore, appealing to the court to compel him (Mutua) to offer financial support to the child she (Ng'ang'a) bore with Juliani," the post finished. 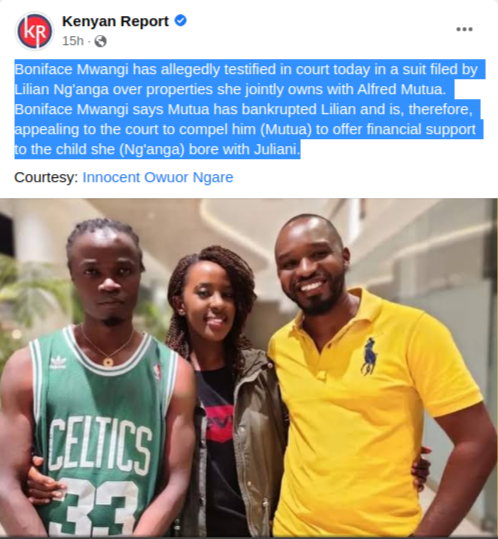 Mwangi has been accused of wanting Alfred Mutua to give Lilian Ng'ang'a child support.

The post attracted more than four thousand comments with most Kenyans doubting the veracity of the report.

Thankfully the father of 3 was tagged in the comments section where he eventually reacted to the malicious post and denied it.

His response to the accusation is below;

It is likely that the people who made the post were well aware of the type of engagement it would get especially at a time when the Lillian/Juliani/Alfred Mutua triumvirate were trending once again.

It is also a bit easy to peddle such disinformation considering the angst between Boniface and Alfred and the love the activist has for the 'Potential' rapper.

The trio have dominated the headlines the past two days after an image comparing the two men was posted online.

The photo has elicited so much reaction from Kenyans online with Juliani getting most of the negative commentary.

Let's hope that he and Lillian will ignore the negativity as they raise their kid.

Netizens constantkly compare Juliani to former Machakos governor Alfred MUtua. They say the rapper is a pauper while Mutua is Mr money bags.
Entertainment
1 week ago

KOT are saying Lilian Nganga fumbled the bag by leaving rich Alfred for struggling Juliani. They said on Twitter that Lilian got it wrong among other ...
Entertainment
1 week ago
WATCH: For the latest videos on entertainment stories

Juliani steps out with his son for the first time