•Dennis celebrated his birthday a few days ago 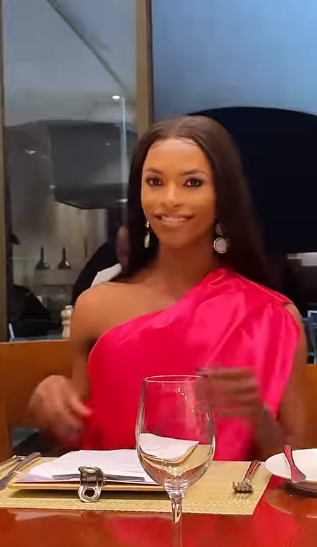 Dennis looked so amazing and we agree. He spoke to Presenter Ali about that video saying he was out celebrating his birthday.

"It was actually my birthday, mbona ni si ji spoil?"

He opened up about his ideal type of date.

"Mtu napenda is my type. That's the type I like. I am not dating currently, sina mtu, I am a very general person. If I like you, then I like you. Everything else is a by the way.  I love someone for who they are for your gender, not for just your personality and our connection that's it for me."

Dennis touched on an incident with singer Akothee last year.

Dennis was rumoured to have said Akothee was the most difficult client he has ever worked with while speaking on comedian Obinna’s KulaCooler show.

Karuri had alleged that he suffered at the hands of the self-proclaimed president of single mothers. According to Karuri, the singer compared the face makeup he had done for her to dust.

Akothee responded saying she would sue him for defamation.

“It's easy nowadays. I am dealing with my health and how my money can work for me, I have no time for dealing with clout chasers, someone will deal with it,” wrote Akothee.

"I don't need your private apology, just finish it the way you started it! This time sickness has humbled me, sina nguvu ya kupigana online. Naweza kuwa napigana na mchawi, aniregeshe kitandani. There is no news,” Akothee said.

“I will not build a brand to elevate your channels, just post your work and let my name rest. Call police,” she said.

Presenter Ali asked whether he would ever work again with her.

Dennis said nothing can be ruled out

"I have nothing to say.  Juu si ati I was lying. So I just kept quiet. When it comes to business, there is something that is called a relationship.

But after a while mna pata industry ni still the same and if we have to work together again sitakataa. But above all let's just maintain professionalism hata mimi kutaja majina ya clients hapo I agree on my end it was uncalled for. That's why nika trend, but you move, you live and learn that's what life is about."

The celebrity and pro makeup; artiste  attributes his success to  "experience and  skill  and how you have branded yourself how you put yourself out there that is how you get known, identified"

"I had been motivated by my friend a guy, who had booked an appointment to be applied makeup, so I looked at the results of my work and said alah even me I can apply myself, so I took pictures and posted online so I realized its something I love doing."

How did his family take it?

"Before my makeup career, I did Agriculture.  So before I convinced them that I have switched careers, it took them a while to understand I had switched careers and it pays. You know it's a female-dominated industry so they were so shocked at my decision to do makeup as a career, they were concerned if it was paying and also if I would be shamed."

Where does his courage to do this publicly come from?

"My courage comes from being sure about myself. I  have the courage to do it and I'm not doing it for anyone else. I feel like if I want to wear a bra and post si nitavaa tuu kwani? I wear for myself and mostly I am a content creator so that is part of what i love doing."

Machachari actor Almasi was playing with a snake on his neck.
Entertainment
3 weeks ago

'Cross-dressing is what feeds me,' Tit Toker Kelvin Kinuthia
Entertainment
1 month ago
WATCH: For the latest videos on entertainment stories