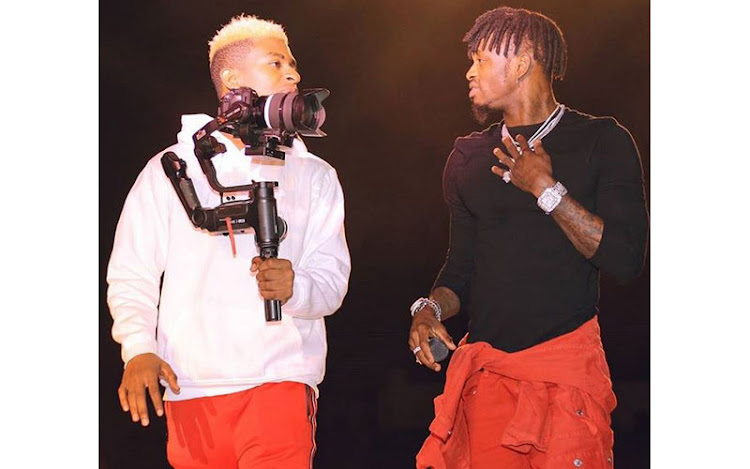 He is known by many as Diamond Platnumz's videographer. But now, Lukamba has decided to blaze a trail in the music industry.

He has released a brand new song titled Maboya which has marked his debut as a musician.

Lukamba has released an Amapiano track which has left people in awe since it is somewhat unusual to the norm in Tanzania, as people might have expected a bongo type of song to showcase their prowess.

This comes with the accompaniment of reports of being sucked by the Tanzanian superstar Diamond Platnumz.

He held a press conference on Wednesday where he announced his debut in the music industry and while at it, he did not mention anything to do with the allegations.

The lad has been sharing a stage with Diamond Platnum'z but lately, he has been lost in action.

(Doing music doesn’t mean I have stopped my work as a videographer, I have just opened a new company and very soon I will be introducing it to society)," Lukamba said.

He is the latest Diamond Platnumz associate who has turned out to be a singer after Q Boy Msafi who was Diamond Platnumz’s fashion designer switched to singing in 2016 after releasing his mega-hit song at the time the title was “Mugacherere” Ft Shetta and Rayvanny.

He said his exiting from WCB Wasafi will give the upcoming videographers and photographers an opportunity to work with Diamond and in the long run grow themselves.

The videographer turn singer will be the second to leave WCB Wasafi for uncertain reasons.

Although in one of the interviews, Lukamba said that Diamond had once urged the team to look further into the future and try to venture into new things, being universal and stop relying on only where they are at the moment.

He has been seen featured in some films a while ago.

Diamond's videographer reveals why he left his wife

Respect the OG! Diamond's photographer begs for Khaligraph's forgiveness after mocking him

Respect the OG! Diamond's photographer begs for Khaligraph's forgiveness after mocking him
Exclusives
2 years ago

He has gained millions of followers because of Diamond Platnumz
Entertainment
9 months ago
WATCH: For the latest videos on entertainment stories