Khaligraph's baby mama, Cashy said that their son does not even have warm clothes

• Khaligraph Jones and Cashy called their relationship quits back in 2018

• Khaligraph and Cashy have a son together 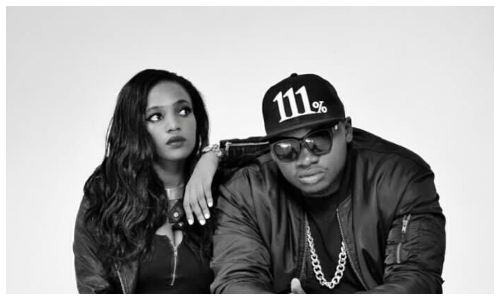 Khaligraph Jones with Cashy in a file photo
Image: Instagram

Kaligraph Jone's baby mama, Cashy Karimi has come out guns blazing to blast the award-winning rapper for neglecting their son.

Cashy took to her Instagram stories to let her fans know that she was ready to be linked with drinks and brands that need endorsements so that she can be able to put two and two together as back-to-school approached.

She lamented on her Instastories how her kid with the 'Yes Bana' hit-maker was suffering and did not even have warm clothes for this harsh cold Nairobi weather.

In one of her posts, she wrote, " Itabidi mnitumie number za wale wadosi wa zile energy drinks za Nairobi na hizo brands zingine sasa. ( At this point, I'll need you guys to send me contacts for the guys handling these Nairobi energy drinks and other brands)

Mnielewe tu, nicheze kama mi ni mtoto wangu apewe ata hoodies za mvua basi. ( I need you guys to understand me, I just need to hustle my way so that at least my child can get hoodies for this rain."

A clear jab at Jones since he is currently advertising an energy drink. And Cashy was not done. She went on to add how distasteful it was for a father to fail to provide for their kid while they're young but when the kid excels in the future then they want to claim and be associated with the child.

She finished off the post by saying that she still wishes for everyone to continue growing themselves and their homes in peace, "Ingawa bado naomba kila mtu azidi kujenga nyumba yake kwa amani."

But Cashy decided she had a few more words to add, cryptically trying to compare Khaligraph's daughter with his wife Georgina Muteti lifestyle with her own child.

Mpasho called Khaligraph for a response to what Cashy had said but he declined to comment on it.

Two years ago Cashy and Khaligraphy were engaged in a tug of war and after a paternity test, Khaligraph demanded to have custody of the child to which Cashy vehemently refused.

Over the years, this is not the first time that Cashy is calling out the OG for neglecting their son.

Papa Jones has however remained tight-lipped over the claims though one might interpret some of his posts after Cashy's rant as cryptic responses.

On his Instastories, he posted a photo of him and their dog standing next to his daughter with his wife Georgina who had a cute grin while his song 'Blue Ticks' played in the background.

He also posted a video of him vibing to his song ' Blue Ticks' with the caption, " Ain't no business with no loose lip/ cause they gon end up on a news flick. Keep it confidential, keep my circle smaller."

Ladies, stop using your kids as a pawns-Kamene

"I have seen it and I have been there." - Kamene Goro
Entertainment
3 months ago
WATCH: For the latest videos on entertainment stories