Kenyans were disappointed that the list lacked big makeup artists and skincare content creators and was flocked by our everyday influencers. 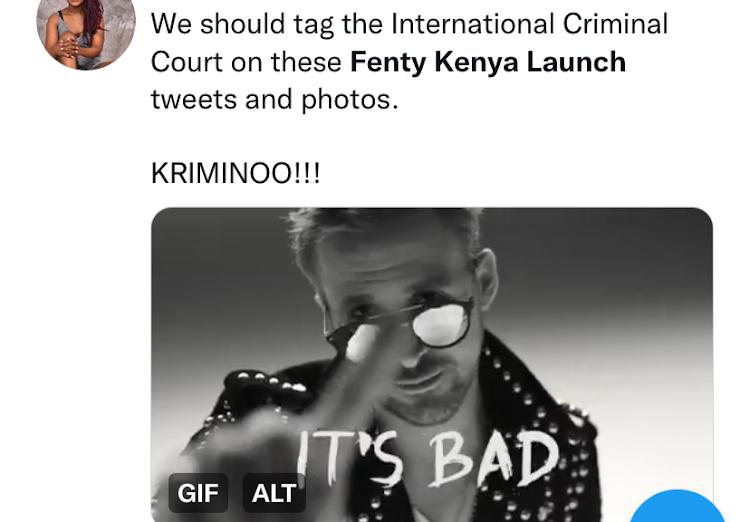 The Fenty Beauty launch in Kenya was themed to be a night of glamour, elegance, and fashion.

But that was not the case and angry Kenyans have taken to social media to call out the organizers of the event. Claiming that if Bad girl Riri was in attendance she would have cancelled her product launch and taken it to Uganda.

She wrote," Wait, so this was a beauty launch and we did not have beauty gurus like Muthoni Njoba, Eman Sallal, and Steve Koby just to mention a few. And so many other amazing upcoming MUA (Make-up artists) in attendance?? Hmmm!"

Accompanied by a meme of a confused and truly shocked lady.

The above mentioned are big Kenyan names in the beauty industry, Muthoni was named Maybelline  Kenya ambassador, while Eman is an acclaimed makeup artist who has masterclass makeup classes and her own beauty products line. Steve is also a professional makeup artist, model, hairdresser, and a real Jack of his craft.

Gaylyne Ayugi, a veteran Kenyan model and beauty pageant titleholder who was crowned as Miss Universe Kenya 2014 and represented the country at the Miss Universe 2014 pageant also took to her socials to share her disappointment.

And the 27-year-old damsel was not holding anything back.

She said she was not surprised as she already knew the event was going to be a social meetup of our everyday influencers, " but didn't we already say this event was gonna be a meetup for the kawaida influencers who go for everything but do not deliver. We expected looks to be served... so far I've seen some an wueh, just laughing. I don't tire for this your influencers."

A fan replied letting her know one of our renowned chefs, rugby 7’s player Dennis Ombachi popularly known to his fans as Roaming Chef,  had been sent a Fenty PR package, and just like his viewers, he was equally confused during the unboxing.

.@ombachi13 being escorted out of Fenty launch after wamegundua he washes his face with hand wash. pic.twitter.com/amNBKI0F25

Ayugi said she lacked words because that was clownery at its finest because in her own words, " who wrote that PR list, because who have to explain to us like little children how a food blogger, a man to be precise who does not do anything skin/beauty related received a PR package."

Fashion and Lifestyle content creator Patience P compared our launch with other countries and this was her take,"Having gone through Nigerian and South African Fenty launches, one thing is for sure, they have a proper distribution on how they invite their influencers. Not the same damn faces at every event. Let us have a proper filter on who goes and attends what."

Mitchele Adhiambo, a budding lifestyle digital content creator also shared her two cents on the whole lack of inclusion and same personalities faces that was witnessed during Fenty's launch.

She wrote, "I needed to look up other countries Fenty launch because I felt there was something wrong with this event on our side.... we need to pull all industries houses in order in our country."

Guess we will forever live comparing ourselves to South Africa and Nigeria as they continue elevating as we struggle while pulling such moves all the time.

What is your take on all this?

A Ugandan was not pleased about Fenty being in Kenya
Entertainment
8 months ago
WATCH: For the latest videos on entertainment stories