• BASATA is responsible for overseeing that Tanzanian artists produce music with proper lyrics in line with the morals set by the governing body.

The regulating body in Tanzania BASATA, has banned the song 'Mtasubiri' by Diamond Platnumz and Zuchu from being played.

This was after a section of Christian citizens in Tanzania caused an uproar over a scene from the video.

"The artist named above has released a song dubbed 'Mtasubiri' and in that music video, there is a scene where the artists are in church singing in a choir. This part has a lot of issues among the Christian fraternity, they feel like it is disrespectful towards them."

The song was released almost a month ago and it has so far been viewed more than 10 million times.

The song is track no 4 in the EP 'First of All', The song calls out people waiting for the 'relationship' between Zuchu and Diamond to fail.

In 2018 Diamond and Rayvanny found themselves on the wrong side with BASATA after being fined over a song they had produced.

Bongo Flava Diamond Platnumz and Rayvanny, together with their record label Wasafi Classic were been fined Tsh9 million by National Arts Council, BASATA over their dirty song, ‘Mwanza’.

The fine slapped on the artists and the record label follows a ban issued by BASATA two days after the lyrically controversial song was banned.

The regulatory board deemed the song to be inappropriate for public consumption due to its explicit s*xual content.

In 2018 BASATA banned all Wasafi performances in December despite their highly anticipated tour. The government body, however, allowed the singer to perform in Kenya where he had three shows lined up.

Tanzania is a country whose majority of the population is Muslims, hence the anger from the Christian fraternity. 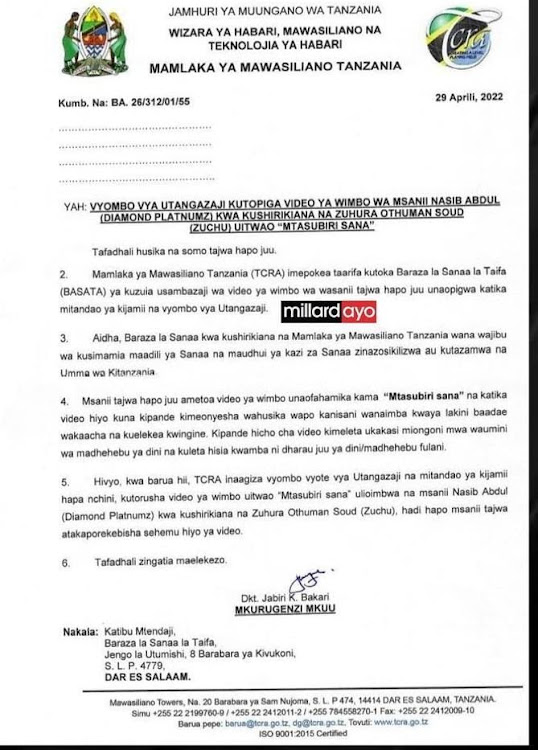 BASATA bans Mtasubiri song from being played in Tanzania

A rapper who penned a viral Mandarin pop song poking fun at Chinese nationalists said Monday he had no regrets about being blacklisted by Beijing as ...
Entertainment
6 months ago
WATCH: For the latest videos on entertainment stories