• Evelyne said that while dating is fancy, marriage is different as both people have to be real to each other.

• Evelyne and Agunda had budgeted for a sh 300k wedding but only managed to raised sh75k. 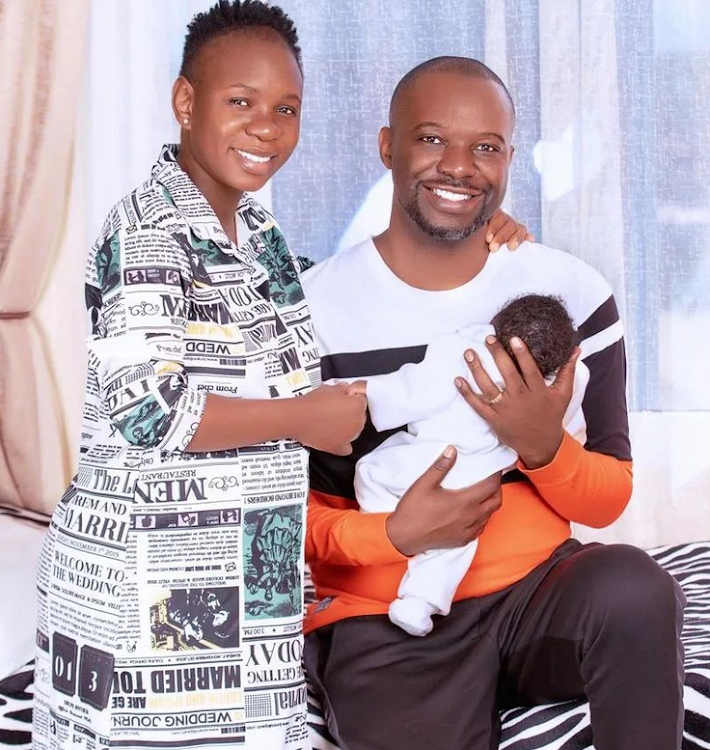 The couple while announcing the birth of their son recounted how they have stood for each other since they started dating.

The couple met in church in 2008 in Nakuru, dated for four years and then held a simple wedding.

Speaking on their YouTube channel, Evelyne said that while dating is fancy, marriage is different as both people have to be real to each other.

"Dating is different from marriage, things become real and there is no pretense. You are waking up the real you and you will be with this person the rest of your life," she said.

Agunda added that when you marry your friend, things are real that when you are annoyed or happy you just show it and that makes everything beautiful.

Speaking about their wedding, the couple said they had budgeted for a sh 300k wedding but only managed to raised sh75k.

"We had a sh1000 bob for our rings. Each ring was 500 bob and we managed to engraved our names. Mine had my wife's name and hers had my name. We had those rings for five years even after she became a big musician, she was still putting on that ring. No one could tell," Agunda said.

"The budget of our wedding was 75k out the 300k we had budgeted for. sh50K for food, sh10 k for tents and we didn't have a photographer"

She said that she accepted to marry him because she loved him.

After their wedding, they had their honeymoon in his house.

"I used to admire wedding show but I loved this guy and so I accepted everything he was bringing on board. After five years of marriage, he told me that since he never took me for honeymoon, we kinda had to go back to his house for our honeymoon."

Evelyne said they changed their ring five years after and got exact original copy of what they had.

"He told me, you have been patient with me and since he had saved money since our business had picked, he took me to this beautiful place, bought good rings but the exact copy of what we had during our wedding. we did not want to lose the memories of the humble wedding we had."

Evelyne and Agunda welcomed a son on April 6th 2022. They named him 'Mshindi' meaning 'a Winner'.

"God gave us a gift of a baby boy!! Welcome to the world baby MSHINDI AKWEYU AGUNDABWENI, your entire family is so in love with you! We are excited to see you grow and become that great person God intended you to be! You are a dream come true, an answered prayer and greatest gift from God!"

Evelyne Wanjiru says they were pressured to get pregnant