• Pastor Ng'ang'a's wife said that after reading romantic messages and calls from women, she gave up and left the man of God. 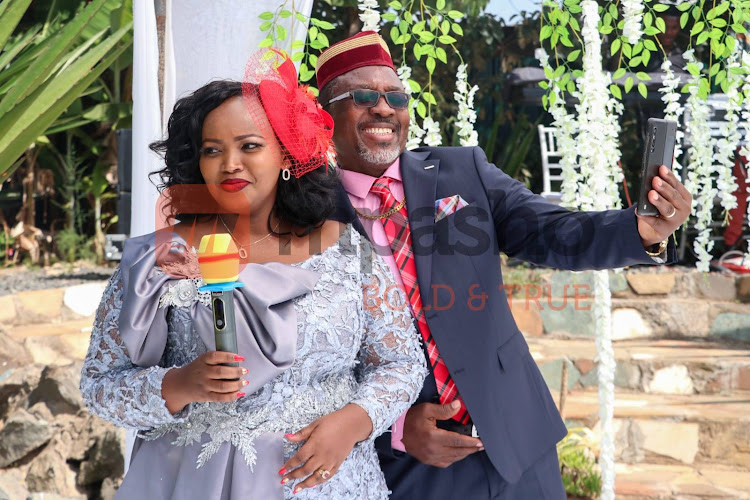 Controversial man of God, Apostle James Maina Ng’ang’a of Neno Evangelism Center says he once involved the police to intervene in his marriage with his wife Murugi.

Speaking in a live session where he interviewed his wife, Ng'ang'a narrated how his wife kept running away from their matrimonial home due to texts he was receiving on his phone.

Ng’ang’a's wife said that his phone created more issues in their marriage.

Referring to herself as Mrs Kenya One, Murugi narrated that having come from other relationships, there were people who wanted to ruin her marriage.

"I have one husband legally married to him. It is not easy but it is a blessing. I don't come from a pastor's family. What I might have known to be a wife is contrary to being a pastor's wife," she narrated.

She said that the competition was high but she was able to overcome it.

"I had to change my phone number and he changed his as well. We started on a clean slate. We started fresh since we both had our past," she said.

Pastor Ng'ang'a's wife said that after reading romantic messages and calls from women, she gave up and left the man of God.

"We collided and I ran away. I packed my bags and things. Running away was not the end and it. I regret that. I learnt that once the devil knows your weak point they will use that."

Ng’ang’a recalled a time he had spent three days with his wife only to receive a message that suggested he had met a woman the previous day.

"I remember we were in Naivasha in a hotel and a message popped and I opened and checked and the person said, 'Thank you for the goodnight yesterday.'."

Asked how she made peace with everything, Pastor Ng'ang'a's wife explained.

"Fortunately I learnt through experiences. The phone was the hardest part of me. I used to question so much when someone called. I started ignoring and it stopped coming. I have seen messages of 'I love you babe' and sweety and so on."

Ng'ang'a said when he found his wife had gone back home with one of his cars, he decided to call the police on her.

"One day she ran away with a BMW. I would call the police for her and she would run away."

Murugi said she finally decided to stick by the man of God without seeking advice from her friends whom she said were single women.

"It reached a point that I decided to become a wife. I thought to myself without the influence of my family or friends since they contribute so much to the break-up. I had many single friends. They would tell me I will get another man. I had a baby so I decided to die in his hand. That was the start of a new life."

She admitted that being Pastor Ng'ang'a's wife is not an easy task.

"God gives us what we can handle. I am blessed to live with him. I am graced for this position."

"They do not care about age all they want is the money." - Pastor Ng'ang'a
Exclusives
8 months ago

Njeru is a pastor and a businessman outside the country.
Exclusives
8 months ago