•The 37-year old officer, a private at Gilgil KDF Camp died in his house at Kahawa Wendani in Kiambu Ruiru sub-county, when his wife’s jaws cast her teeth through his thumb, chest and shoulder.- DCI 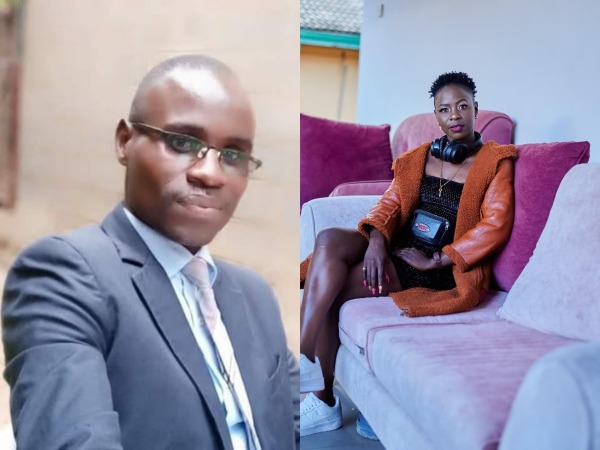 Kenyan artiste Violet Asale alias Zian Achana now says she did not kill her KDF husband through biting as alleged by the DCI.

Achana was married to Daniel Omollo Onyango. In a tweet by the DCI in April it was alleged that the sleuth was bitten by his wife.

"Last night, a couple’s squabble involving a Kenya Defense Forces officer turned lethal when his 27-year-old wife, armed with her teeth, served him three major bites that promoted him to eternal rest.

The 37-year old officer, a private at Gilgil KDF Camp died in his house at Kahawa Wendani in Kiambu Ruiru sub-county, when his wife’s Jaws cast her teeth through his thumb, chest and shoulder."

Speaking during an interview with Presenter Ali, Achana now says the death of her husband might have been caused by witchcraft due to a fight.

At the time my husband was still talking, he had not lost consciousness. If I had killed my husband I could not have called for help.

I had to scream so that neighbours could help. Neighbours had refused to help.

At the time I was with my daughter, my husband's sister, and his cousin."

"We had gone home and there was a land issue, he and his cousins were fighting over land.

On that day his cousin's sister stopped me at the market and told me to go tell my husband to leave the shamba alone.

Or he would get sick and would not find any treatment anywhere.

I was also told to tell the mum that if she wanted to enjoy Daniel's money as a KDF officer she should warn him to stay off the land.

That if he wants to go to Nairobi walking on his feet he should not involve himself with the land fight. That was on a Monday evening.

So I told my mum-in-law and my husband but they never took it seriously.

On Tuesday my husband went to bye miraa and met the cousin who also warned him to stay off the land.

The cousin told my husband that if he went back to Nairobi and came back to 'ushago' alive then the cousin would not be serious (watajua yeye ni nani).

The cousin insisted that the only way Daniel would come home is through the KDF hearse.''

'My husband left me for a sponsor,' - Listener tells Maina Kageni

"Maina, mine left me for a 6o-year-old barmaid.'' - listener cries.
Lifestyle
2 months ago

Achana says she and her husband were planning on living together as a family as they had parted in 2019.

'We were having a good time.

In 2019 we had parted but before his death, we were on good terms. He was to take dowry to my parents, we were also to move into a 4 bedroom house.

He had also a million shillings loan and it was to mature less than a week to his death. So why would I kill him before the money matured?

Among the Luo witchcraft is real. He just started crying he can't breathe.

Something just knocked him, he turned wild.

Yes, I bit him but I was trying to remove myself from his grasp as he was choking me.

A military guy is trained to kill.

He choked me, his eyes were very red I had never seen him this wild. My daughter is the one who saved me, she screamed and my husband's sister came and saved me.

I was the one to die, He hurt my backbone up to now am on treatment." Concluded Acahana.

Storm DwarChild lifeless and bloody body was discovered by a passerby at Sunrise Estate in Bungoma town just a few metres from his apartment on ...
Crime
2 months ago