'It's very bad for a mother to see your nakedness, please change your ways' Manzi wa Kibera's mum laments 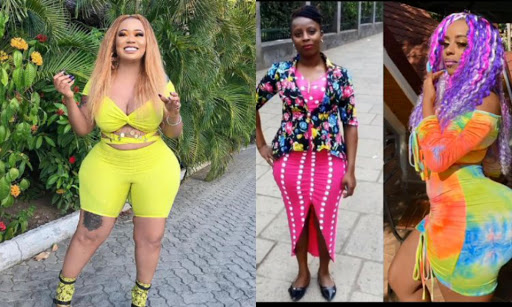 The adoptive mother to upcoming socialite Wambo alias Manzi wa Kibera has lamented about how her daughter has embarrassed her.

Speaking during an interview with Mungai Eve, Wambui's mum shared that she took Wambui in after she lost her biological mother in a car accident at age 2.

I raised her from when she was two years old after her parents died. The mum was hit by a car in Kawangware when she went to hustle and do business.

I adopted her after her parents who were my neighbors in Limiru died. We have been living together with her in Limuru until we fell out.

I saw her viral photos of her dressed skimpily. I talked with her and advised her to change. She ran away from home and said she will disown me, saying I'm not her mother.

I have raised her in a Christian way, I'm a chair lady in the church. That is why it hurt me to see my daughter is showing her nakedness.

She has asked Wambo to come back home so that they can bury the hatchet by forgiving each other and move on.

I was shown the photos and I could not believe it. I asked if it is her she has even lightened her skin she has changed.

Whenever she is I'm asking her to come back home and we forgive each other.

I don't want to be held accountable for abandoning her, I will just accept her the way she is. she can come home. we can work out any issues.

Wambo studied up to form one. I did not have the financial capacity to pay for her high school fees because I have other children and I am a single mother.

Wambo's mother added that her daughter hasn't always been a bad girl and that it's only that she got involved with the wrong crowd that things changed.

She was a good girl, I don't know how she rebelled. Three after later is when I started noticing she has changed. She started wearing minis and we argued about that.

She has changed her number I cannot get in touch with her, I have been wondering where she is. It is just the other day that I saw her on Youtube.

Manzi was Kibera said she was adopted by a white woman.

The adopted mother clarified this saying,

"When we had our disagreement about the career path she has chosen she said she will disown me. so she went and changed the story saying I'm no longer her mother. Yes, I'm not the mother, I adopted her."

Speaking on the kind of girl she is, her mother shared

'She was a very good girl, she changed when she got older. Maybe it is bad company. I haven't seen or talked to her for 4 years. I did not know where she was.

What made me know how to trace is her is when I saw the videos. Even if she is getting fame and money, I would not like her to get it in that way.

"Eric Omondi is not a bad person, if he accepts my daughter and he comes presents himself to her parents then I cannot refuse him to marry her.'

Her final message to her daughter

Wambui, I love you, when your parents died I took you under my wings and gave you my name, Wambui because I loved you very much but I would like you to change your career.

I have no regrets about adopting her because her mother was my best friend, all I do is pray for her to change, be safe and happy.

It is very bad for a mother to see your nakedness, please change your ways you will find a better job.

We would love our children to be like us, to avoid soiling our reputations.