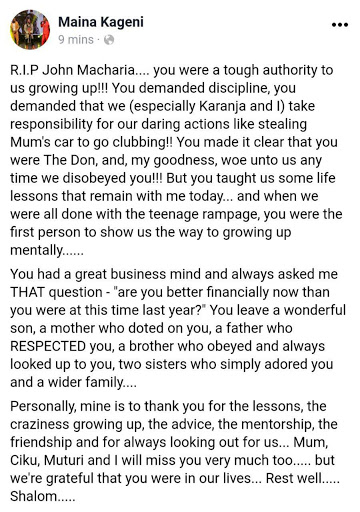 By now, I am sure that if you read Mpasho, you are aware that Maina Kageni and the late John Macharia weere cousins. John Macharia passed on in the small hours of Friday morning following a traffic accident along the Southern Bypass.

Maina Kageni went to condole the family and mourn with them in their time of grief and also took the time to share a touching message about and to his late cousin.

From the message Maina Kageni posted on his Facebook page, will undoubtedly be missed. Maina took the readers of the post to "the good old days" when they were growing up together but also took the time to mention the virtues the late John Macharia not only espoused but also sought to impart on those closest to him.

Check out the message below: