Officer arrested after shooting man at close range in Umoja

Police say they are yet to establish the motive of the shooting.

• Cases of police being involved in the crime have been on an increasing and worrying trend.

• He was arrested and placed in custody pending further action. 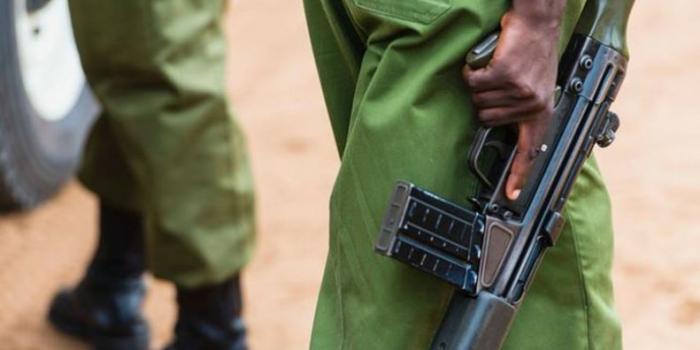 An officer with a gun
Image: FILE

A police officer was Sunday, November 13, arrested after he shot and killed an unidentified man after an argument in Umoja area, Nairobi.

The motive of the shooting is yet to be established. But witnesses told police they saw two people argue at about 3 am before one of them reached out his gun and shot the other one in the head, killing him on the spot.

Police were informed and rushed to the scene and found constable Jason Nyamolo armed with a Glock pistol loaded with 14 bullets.

He was arrested and placed in custody pending further action.

It is not clear what he told his colleagues but officials said the matter is under probe.

The body with a single gunshot wound on the head was moved to the City mortuary awaiting postmortem and identification.

Police say they are yet to establish the motive of the shooting.

Cases of police being involved in the crime have been on an increasing and worrying trend.

Police have internal mechanisms to deal with such reported cases including using their own to investigate them, use of Internal Affairs Unit and Independent Policing Oversight Authority.

Dozens of police officers are facing various cases in courts. Police term the cases as isolated.

He said they are dealing with the two per cent who have gone rogue and they have the capacity to address the issue.

Koome called upon police oversight institutions to take up their rightful roles and assist the National Police Service in dealing with rogue officers.

Koome assured the public of their safety and security. He also noted that all police officers were well versed with the law on the justifiable instances when they are supposed to use a firearm.

What awaits IG Koome after being sworn into office

Koome was vetted for the position on Tuesday by a joint committee of the Senate and National Assembly.
News
3 weeks ago

Judge Ogembo has directed that Cheburet is presented to the prison clinical officer for a medical checkup over the diet issue.
Crime
3 weeks ago