Kenyan nurse June Onkundi murdered by patient in the USA

A GoFund me account created for her is targeted to 100,000 US dollars

• Kenyan nurse was fatally stabbed by her patient while attending to them.

• The suspect is due in Court on November 9. 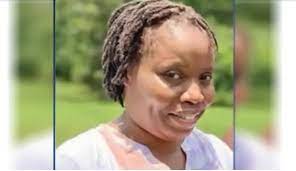 June Onkundi Kenyan nurse stabbed by her patient in US
Image: Twitter

June Onkundi, a Kenyan nurse working in Durham City North Carolina, was reportedly stabbed while on duty by her patient before dying on the spot on 18th October 2022.

The learned nurse had a Master’s degree in Psychiatric Nursing and was set to commence her PhD program at Duke University.

"June would make any gloomy day to be a brighter one. Her voice and presence were magical to both staff and patients. The community has lost a great nurse," the page indicated.

Reports indicate that the account has as per now raised a well-wishers raised over Ksh1.7 million for the family.

Police responded to a distress call right after and apprehended the said patient and is now in custody due in court on November 9th for a hearing.

According to a prosecutor in Court, June's patient had a criminal past of violence against women having allegedly spent almost a third of his life behind bars and was reportedly mentally deranged.

The grieving family, represented by the brother In-law described June as the hope of the family and asked for better and safe conditions for working.

“For us as family members, it is very painful we are saddened that the same very population she had the passion and desire to help is the one that finally took her away from us and left us now grieving with four children and a husband,”the brother in-law stated.

Speaking about the case, the president of Carolina North Carolina Nurses Association president Meka Douthit, raised an outcry in a statement to try and avoid a repeat of the same incident.

"Violence in the workplace is one of the greatest challenges facing nurses, and the problem has grown exponentially over the last few years. It is my desperate hope that June Onkundi’s death serves as a turning point and that those of us in healthcare can truly begin to address this problem,” the statement read in part.

Former Meru Senator and CS nominee Mithika Linturi has said that he wants to forget the many cases he has in court, and focus on serving Kenyans.
News
1 month ago

A Brazilian politician is in custody after throwing grenades at police officers who came to his house in Rio de Janeiro state to arrest him.
Crime
1 month ago