Three men from the Land Cruiser walked and joined those who were spraying Otieno with bullets while issuing some instructions.

• Kevin was alleegd to be involved in shady businesses.

• The whereabouts of his brother are still unknown. 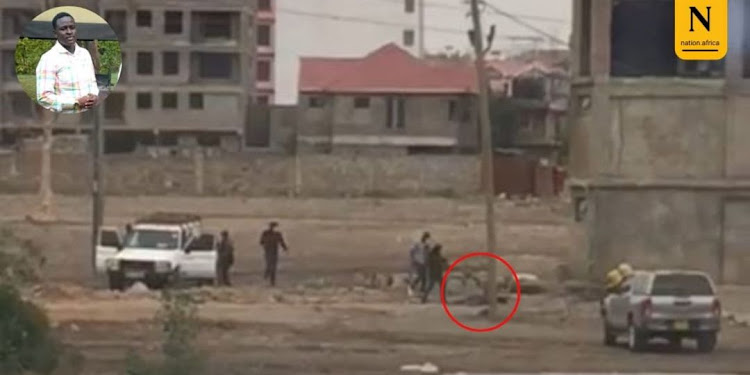 Kevin Odhiambo. He was shot 36 times by assassins in broad daylight in Utawala.
Image: Nation

A few weeks ago a man identified as Kevin Otieno shot 36 times in broad daylight in Utawala.

The details of his shooting were scanty but not anymore.

The Nation has seen footage showing the moment Otieno was on Friday, September 23, 2022, cornered by over 10 men who felled him in a hail of bullets.

In the video, the front doors of the white land cruiser are flung open and some activities from three men which were not captured clearly were going on.

This is after some of the gunmen raced after the woman who was with Otieno, captured her and ordered that she keeps quiet as she was screaming attracting the attention of more people.

The Nation has established that after they got hold of her, they forcefully bundled her into the Land Cruiser.

As this was going on, two of the gunmen were standing a few metres from where Otieno was lying and continued pumping more bullets into his body.

One of the men is even seen stepping on him as if to ascertain indeed he was dead.

At this moment, one of the three men from the Land Cruiser walked and joined those who were spraying Otieno with bullets while issuing some instructions.

“Before the gunmen went away, one of the them shot Otieno in the eyes,” added a witness.

Before they drove off, the gunmen asked two men, who were near the scene of the shooting as it happened, to surrender their mobile phones.

They took the gadgets and sprayed them with bullets before leaving the scene.

A witness told Nation that the two vehicles immediately left and moments later curious onlookers rushed to see what was happening.

Kevin's brother who was kidnapped by the same men is still missing.

On Friday afternoon Mihango residents in Utawala were confronted by a shocking sight when a man was shot 36 times in broad daylight by unknown gunmen.
Crime
2 months ago

Mystery surrounds the motive of gunmen who shot a man 27 times in a macabre attack in Utawala, Nairobi.
Crime
2 months ago
WATCH: For the latest videos on entertainment stories