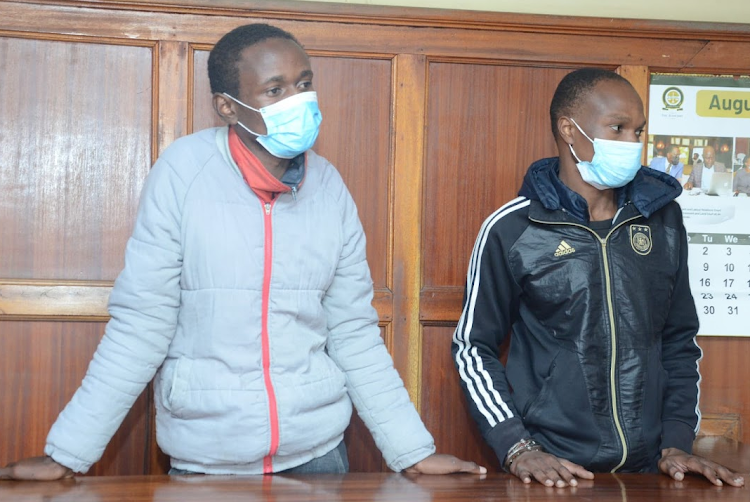 Two armed men who were caught on CCTV robbing a man in the Kilimani area have been sentenced to life imprisonment.

Timothy Jahan Muzami,28, and Humphrey Minyata,25, were caught on camera stealing electronic devices worth Sh396,733 from a pedestrian along Lenana Road on June 25, 2020.

Among the electronic devices stolen included a Macbook, an iPhone, a magic keyboard, a mouse, and eyeglasses among other items.

They were in a bag that the complainant was seen surrendering to the suspects in the footage.

Chief magistrate Zainab Abdul, said the weapon was never recovered, and it is being used in the streets putting many lives at risk.

During interrogation, the magistrate said the family of the accused requested to have the court grant them a non-custodial sentence.

However, the court said the offence alongside the evidence produced, the case should not be granted a non-custodial sentence.

“Following the recent incidents, there has been an increase in the number of people getting robbed at gunpoint while boda bodas help them escape,” the magistrate said.

“Therefore, the court is mandated to give a punishment that will serve as a warning to anyone who will commit a similar offence.”

Man pushes bae down 5 floors, on the run

The woman had joined Kuria in his house on Thursday morning before a commotion was heard from the house.
Crime
5 months ago

What a terrible miscalculation from the thug who seconds later was fighting to regain control of the firearm from Irungu, as the prey turned out to ...
Crime
6 months ago

According to the charge sheet, the four allegedly killed Wycliffe Owour on March 24, 2020
Crime
6 months ago
WATCH: For the latest videos on entertainment stories