'I wore this ribbon for Agnes Tirop,' Angela Tanui gushes

• "This is for remembering my friend Agnes Tirop who died a terrible death." - Angela Tanui 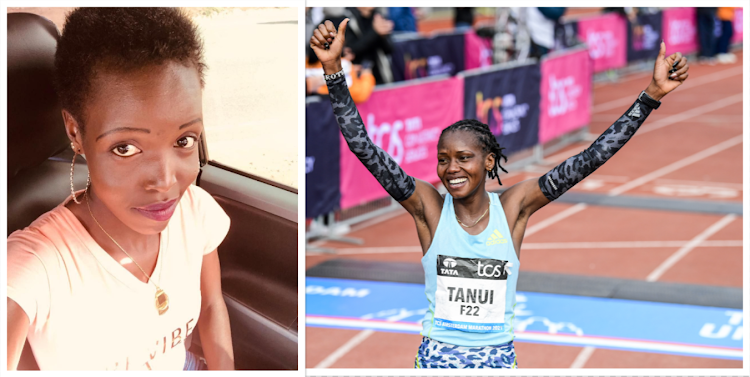 Kenyan athlete Angela Tanui joined the elite list of top 10 fastest women runners in the world after she emerged victorious at the Amsterdam Marathon.

She ran the race with fellow athlete Agnes Tirop on her mind and heart. Tanui wore a white ribbon to honour Tirop who was found stabbed in her bedroom at her home in Iten last week.

Detectives say Tirop was found lying in a pool of blood with a stab wound on her neck. Her husband Ibrahim Rotich is the prime suspect.

A court has ordered that her boyfriend be detained for 20 days for investigations into her death to be finalized.

Speaking to the press after the race, Tanui explained why she had on a white ribbon.

"This is for remembering my friend Agnes Tirop who died a terrible death," Tanui gushed.

Adding, "It was a terrible death and today I came here to run and win. I came and even set a course record and this mark will always be in memory that it was the day I ran in honour of Agnes Tirop."

Tirop will be buried Saturday at her parents home in Nandi County.

The committee organizing the burial announced that a post-mortem on the body will be done today at the Moi Teaching and Referral Hospital in Eldoret.

Zia Bett is mourning the death of her sister Janet that took place today. The wife to Kenyan rap star, Nyashinski has been posting mementos as she ...
Lifestyle
1 month ago