Piece by: KNA by Jebichii Chepkwony

• The prosecution counsel had called 10 witnesses to prove the case against the accused. 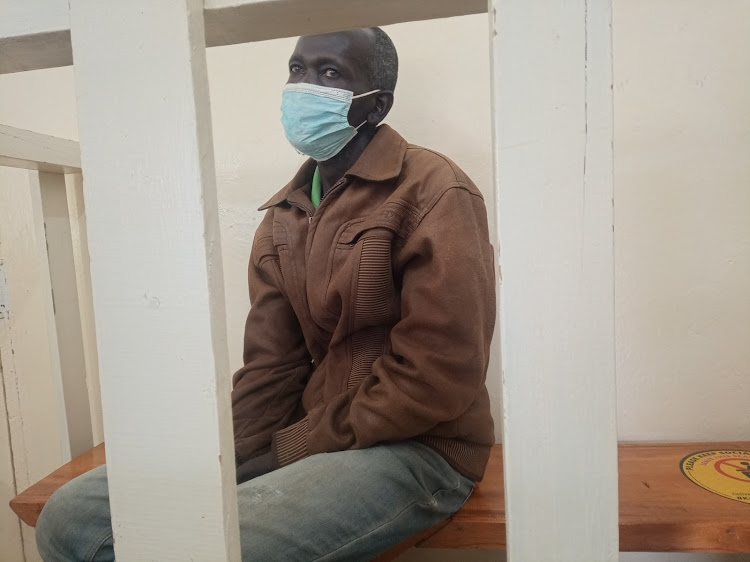 Haron Cherono during defense hearing on a case where he is accused of causing the death of a minor on July 24 at Baringo Central, he denied committing the offence before Kabarnet Senior Principal Magistrate Paul Biwot.
Image: Jebichii Chepkwony

A man alleged to have defiled a 10 year-old-girl who later succumbed to her injuries three months ago on Monday put a spirited defense before a Kabarnet court dismissing testimony of his wife as misplaced and untrue.

Haron Cherono told Senior Principal Magistrate (SPM) Paul Biwot that his wife of 20 years was a trouble maker who thrived on falsehood adding that she was not truthful at all when she informed the court that she saw him attempting to defile the girl.

“My wife’s testimony is a lie, she said she saw me trying to defile the girl, she is a liar. I did not kill the girl, I am wrongly accused, MJ (the name given to the deceased in court documents) stayed at my house since she was young, I used to provide for her,” Cherono claimed.

Cherono who is facing manslaughter charges, for allegations of killing MJ on July 24, this year, at around 1pm in Baringo Central, Baringo County, denied defiling the minor whom he stated has been staying with his family since she was young.

Cherono, who himself called five witnesses, said that the witnesses who testified against him lied to court regarding allegations of defiling the minor.

The prosecution counsel had called 10 witnesses to prove the case against the accused.

Government pathologist Dr Wangare Wambugu who conducted the postmortem on the deceased noted that the minor had died due to renal dysfunction resulting from sexual assault.

The pathologist said that the minor whom she examined on August 3, 2021 had swollen lower legs plus an absence of hymen and chest cavity.

“I examined a minor approximately 10 years with a diaper, whose body had decomposed and upon examining I found that the cause of the death was renal dysfunction and that her kidney was infected,” Wangare said.

A teacher who testified in the case told the court that on May 11, she noticed the child walking style had changed, she inquired only for the minor to say that her uncle had been defiling her forcing the teacher to share the details with the accused’s wife, but the minor ran into hiding when she learnt that her aunt had been informed about the incident.

A search for the minor, magistrate was told, commenced where she was found on May 19 and taken to Baringo County Referral Hospital, Kabarnet, but later transferred to Moi Teaching and  Referral Hospital (MTRH), Eldoret, for further treatment after her condition worsened.

After being discharged, the court heard, the minor was taken to Sunrise Children Home, in Kabarnet town however she succumbed on July 24. The case will come up on October 12 for judgment.

Anita Nderu reveals the qualities that attracted her to hubby, Barrett

Anita Nderu got married last month to Barrett Raftery. Most Kenyans were surprised that the former TV host and radio personality had gotten hitched.
Exclusives
1 week ago