A woman who is dating a man 18 years her junior has said she is fed up of being mistaken for his mother – and insists that she is not a cougar because he pursued her.

Cree Ingles, 49, met Aaron Johnson, 31, while visiting another neighbour in the building they both live in Eugene, Oregon, in the US.

They quickly hit it off after exchanging numbers and even slept together just hours after meeting – despite Aaron having a girlfriend at the time.

Mapenzi hayabagui! Dark skinned Luo woman wows many after photos of her and mzungu husband emerge

The pair, neither of whom work due to disabilities, have now been together for seven years. They insist their relationship isn’t just about sex and took part in a handfasting ceremony – a form of pagan wedding –  in September last year before having a commitment ceremony last month on their anniversary.

But despite their happiness, Cree complains that she’s mistaken for her partner’s mother ‘about three times a month’, but admits: ‘I’m used to it.’

She said: ‘About three times a month I get called his mom or he gets called my son when we are out in public together. Although I’m used to it, it does get old that people just assume our relationship when we are together.

‘Sometimes I will reference old sayings, I asked him if he enjoyed his time without his “ball and chain” when I went out for the day without him, and he had to Google to see what I meant.

‘Songs, movies, or music – he doesn’t know what I’m talking about. For instance, he didn’t know who The Fonz was. He thought it was a band.

‘We have a hard time making friendships because either the men or women we try to befriend hit on him or hit on me. They don’t take our relationship seriously.

‘A common misconception is our relationship is completely about sex. You don’t stay together with someone for over seven years and it just be about sex.’

Aaron initially lived three doors down from Cree on the floor above, but once a unit beside her flat became available he moved in next door.

Although both of their families have been accepting of their relationship, the pair face judgement from outsiders – with some even calling Cree a ‘cougar’.

Cree said: ‘I don’t claim the title of cougar because he came after me, with a vengeance. I thought I was just messing around with the neighbour kid when he went there and made it obvious he was interested in me. 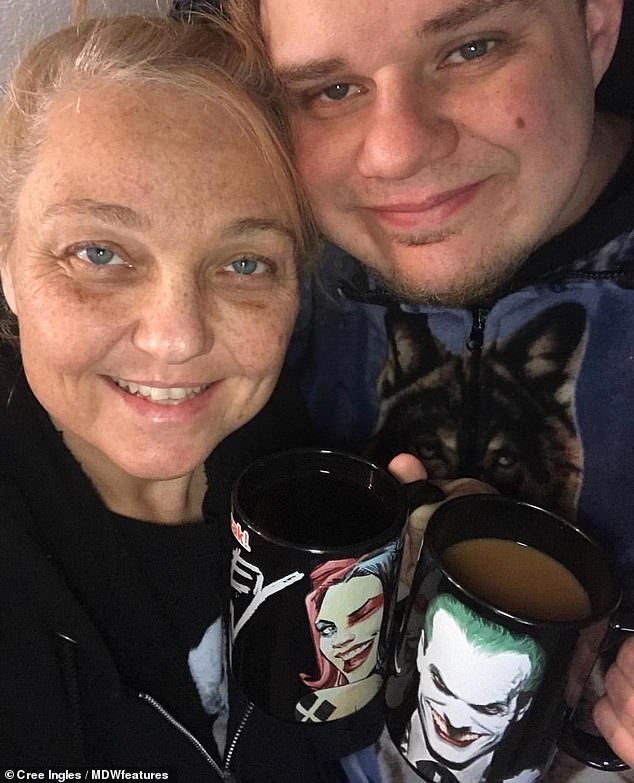 At first it felt weird because I felt like everybody was judging me, but now we just go about our day and don’t worry about it.

‘Some people do assume that I’m his mum but we both quickly let them know that we are together.

‘We have been in funny situations because the people are so embarrassed, or they are just flat out rude and stop speaking to us after we say we’re together.

‘That’s really their issue and not ours. Love is love. Love is hard enough to find without putting restrictions on it.

‘It’s nobody’s business what you do behind closed doors, and if they want to make it their business they need to look inside their own lives and fix their issues before judging others.’

‘People have not been watering their relationships,’ Vivianne on why Kenyans are not pleased with quarantine

Indoor games to keep your kids active during quarantine- List

‘I want my hubby to cheat so he can buy me a car,’ confesses pastor’s wife

For the love of shoes! DP Ruto’s daughter shows off designer shoes

‘Stick to men of your class,’ Andrew Kibe advises Tanasha after breakup with Diamond

This Is The Prophetess Who Led Rapper Collo To God

Kwani alirogwa? Diamond snubs his kid with Tanasha after break up...

‘I became alcoholic, my wife left and friends deserted me,’ Asbel...