Magoha died at the Nairobi hospital after suffering a cardiac arrest.

• Magoha and Barbra, a Nigerian, were blessed with a son, Michael, who is a medical practitioner. 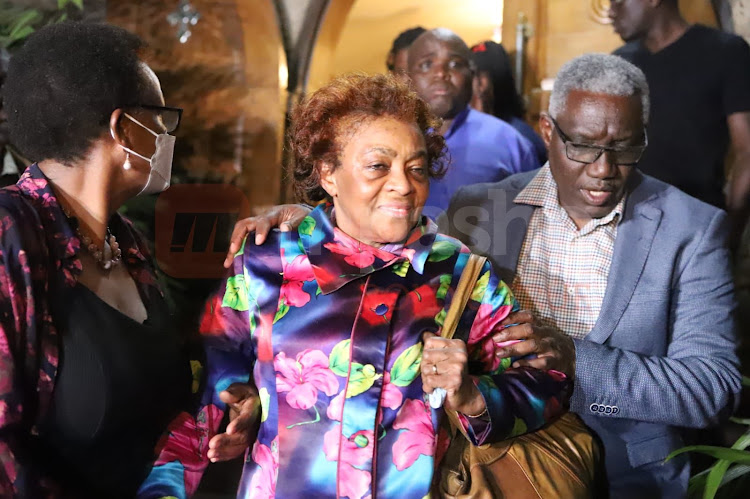 Barbara, together with other family members went to the Lee Funeral home after his demise.

Barbara who wore a colourful skirt suit is seen boarding a Toyota V8 car after viewing Magoha's body in the company of her friends and relatives.

One of the relatives who had converged at the morgue condoled with Barbra, whom he referred to as aunt.

She stops and looks back and responds to the male relative. In her response, she said she had tried to call him in vain.

Magoha and Barbra, a Nigerian, were blessed with a son, Michael, who is a medical practitioner. Magoha died at the Nairobi hospital after suffering a heart attack.

His friend and colleague Walter Mwanda narrated that they had tried to save him from the jaws of death in vain.

He narrated that at around 3 pm on Tuesday, Magoha's wife Odudu Babra called him asking for help urgently.

"I was seeing a patient and I called a colleague to take over, I rushed to my car and started driving. Just four Kilometres away, she called again and asked me whether I had a blood pressure machine," he said.

Mwanda said that he rushed back to the clinic to pick up the blood pressure machine.

"When I was about four Kilometre to the home she texted and asked me whether I could get an ambulance I was too close to their home and there was a traffic jam," he said.

He said that when he reached the house he met Magoha's son, Michael Magoha who took him to where his father was.

"I found him seated and he said oh! You have come and I answered him I have come to take the blood pressure. The blood pressure machine was not recording and at that time he snipped off to a sitting position," Mwanda said.

He added that they carried Magoha to the car where he and Magoha's wife followed behind.

"They were ahead of us about 200m. They reached about ten minutes earlier than us. From the information we had was that he collapased and was resuscitated back by his son," he said.

When they had reached 100m to the Nairobi hospital Magoha collapsed again.

Nairobi hospital in a statement regarding his death said efforts to resuscitate him were unsuccessful.

Magoha's son, colleague narrate how they tried to save former CS

• Details of Magoha's final moments were unpacked at the Lee funeral homes where friends and relatives converged to receive his body for ...
News
2 days ago

Magoha was rushed to the hospital after he collapsed at home today.
Politics
2 days ago