The Agriculture CS pulled strings behind the scenes to rescue the governor.

• The botched impeachment of Meru Governor Kawira Mwangaza has exposed the silent political wars pitting some of the seasoned politicians.

• This was evident when Agriculture and Livestock Development Cabinet Secretary Mithika Linturi hosted the embattled Governor at his Kilimo House office. 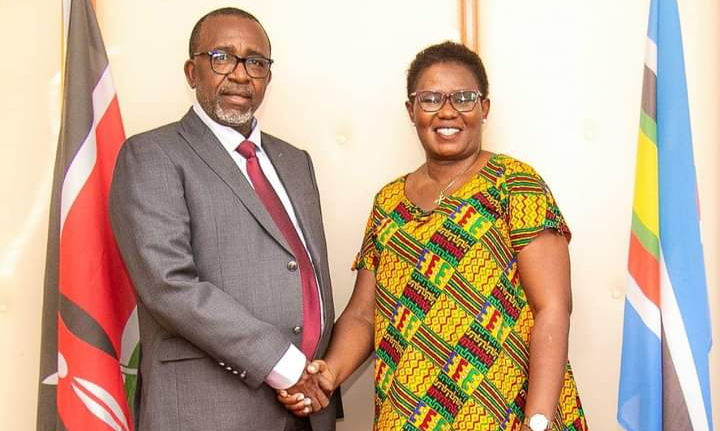 The failed impeachment of Meru Governor Kawira Mwangaza has exposed the silent political wars pitting some of the seasoned politicians.

This was evident when Agriculture and Livestock Development Cabinet Secretary Mithika Linturi hosted the embattled Governor at his Kilimo House office.

The meeting happened a few days before the Senate Special Committee led by Kakamega Senator Bonny Khalwale prosecuted the matter.

The governor was cleared and given a clean bill of health.

The political undertones in the whole quagmire have exposed the influence of Linturi against immediate former governor Kiraitu Murungi.

After the meeting, Linturi told off those criticising him for associating himself with the governor.

In a clever and strategic statement, the CS said that the meeting was about collaboration between his ministry and the county.

However, it has now emerged that the two also talked about the political stability of the county and it appears that he is willing to help when the need arises.

Ordinarily, one would have expected that Kiraitu, who is the senior most and most experienced leader, to intervene to save the situation and stabilise Meru.

In his statement, Linturi said that "he will work with all governors despite their political affiliations."

“My ministry will work closely with all governors despite their political affiliations as we strive to improve food production and promote food security in the country,” Linturi said.

“Yes I met Mwangaza in Nairobi and I have seen some people talking ill about it. I’m a Cabinet Secretary and I will continue with my work. During our meeting we agreed on issues like desert locust invasions among other critical topics,” he said.

Mwangaza had ignited a political storm in Meru on Tuesday when she posted her picture with Linturi on her social media pages with a short caption “Meru Must Be Happy.”

The governor is now battling to save her relationship with Members of the County Assembly who seem to have completely lost trust in her leadership.

She is now free after the Special Committee on her impeachment on Friday acquitted her.

Speaking after the Committee tabled its report, Senate Speaker Amason Kingi pointed out that there was a need to adhere to Section 33(6)(a) of the County Government's Act and Standing Order 84(a).

It states that, "If the Special Committee reports that the particulars of any allegations against the Governor have not been substantiated, further proceedings shall not be taken under this section irrespective of that allegation."

This means that the matter of Mwangaza's impeachment is put to rest. She will, however, need to change her tactics if she has to successfully run the county.

Linturi could also use his experience to help the governor and the MCAs to bury the hatchet and work together.

In the Senate, the governor and the MCAs were advised to work together for the sake of the Meru people.

Pointing out that Mwangaza had been handed a new beginning to her leadership, nominated Senator Hamida Kibwana pleaded with the Meru MCAs and residents at large to support the governor.

"I am sure this time she has learnt a lesson and she will work with you," she said.

Kawira Mwangaza, the Meru Governor has survived impeachment after the Senate rejected all charges levelled against her by the MCAs.
Politics
1 month ago

• Kawira's defence team had at the beginning of Wednesday's hearing said that the governor would not testify after chairman Boni Khalwale sought ...
Politics
1 month ago