• Sonko said that for the past 10 years, his Rescue team has been helping in cases such as baby Sagini's.

• He said he cannot have been playing PR with people's children for the last ten years. 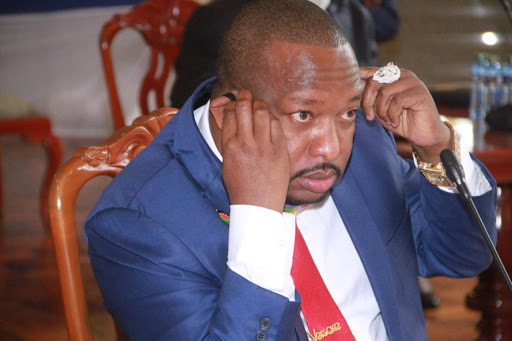 Mike Sonko, the former Nairobi governor has said that there is a section of  Kisii County leaders blocking him from helping baby Sagini.

Sonko said that he is not interested in any political seat at the moment so it is not a political mileage stunt.

"I am not vying for any seat in Kisii, the campaign period is over. Mimi ni mtu tu wa kusaidia watu," he said.

He said he has just volunteered to help with the sad case of baby Sagini because of his history of helping people.

"The Sonko Recuse team has been having several serious cases like that of baby Stanley from Kericho, that of the girl who had a tumour in her brain and we took her to India, baby Kayla who we took to India and the operation was successful," he said.

Sonko said that even in the case of the child who was shot by Al Shabaab terrorists, they intervened and the child is still alive 10 years later.

"We cannot have been playing PR with somebody's kid for ten years," he said.

He asked the Kisii leaders to cooperate and work with him to help baby Sagini and his sister.

"We respect Kisii Governor and everyone in Kisii so please, let's work together to help baby Sagini and fly out baby Sagini and get him serious medical assistance," he said.

He asked the leaders to put aside political differences and help the children instead.

Sonko: I have been blocked from helping baby Sagini

Politician Mike Mbuvi Sonko is now alleging that some forces are blocking him from trying to help Baby Sagini.
Politics
1 month ago

Why Kisii woman rep was blocked from helping baby Sagini

Kisii Woman Representative Donya Dorice Toto Aburi has come out to say that she too has been blocked from helping Baby Sagini.
Lifestyle
1 month ago