• Senator Boni Khalwale has blasted Mugiithi singer Samuel Muchoki after the dramatic incidence between his two women, Karen Nyamu and his wife Edday

• In his message, he defended nominated senator Karen Nyamu asking trolls to give her a break. 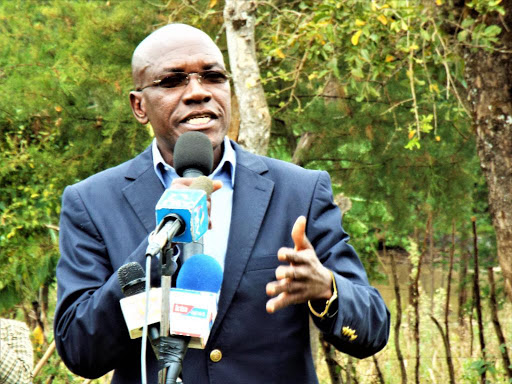 Boni Khalwale has said that CS's are not a prerequisite for CS's
Image: The-Star

Kakamega Senator Boni Khalwale has blasted Mugiithi singer Samuel Muchoki after the dramatic incident between his two women, Karen Nyamu, and his wife Edday over the weekend.

Khalwale who has happily embraced polygamy said Samidoh is already confused and not able to come out despite him having two 'wives'.

In his message, he defended nominated senator Karen Nyamu asking trolls to give her a break.

"I’m appealing to KOT (inflated as you are) to give Sen Karen Nyamu a break. Here is a young woman who loves her man but unfortunately the guy has no idea how to manage his wives," he said.

He then called on Samidoh to apologize to his two women for the unfortunate dramas that have been happening in his silence.

"He ought to apologise for his ineptitude on matters of family. He is to blame. Polygamy is NOT for boys!"

"The polygamy association notes with bitterness the manner in which our member is not taming his wives. He should ensure harmonious co-existence and respect between the two wives."

The self-proclaimed president of the polygamy association in Africa said Samidoh should treat both wives equally.

"No wife should be undermined. If he goes with Wife A (Edday) to Dubai let him take Wife B (Karen) to the Maldives, failure to which the consequences should be better imagined than felt," he said.

In a seven-point thread advice, Letoo added that every wife must know her time, to avoid such embarrassment.

"They were married differently, every wife must therefore know her time to avoid embarrassments and public nuisance that exposes the polygamy fraternity in a bad light," he said.

Media personality Joyce Gituro also criticized the Mugiithi singer over the way he has handled his two wives.

In a post she made on her social media, Joyce defended her point of view by stating that her own dad had 5 wives yet things flowed well in their extended family.

Her caption is below;

"My Dad had FIVE wives, we lived like a family, because he was firm. My young brother @samidoh_muchoki STOP subjecting your wife to this kind of drama! Happy Sabbath my people."

Kenyans are reacting after nominated senator Karen Nyamu declared herself single hours after an altercation with Edday Nderitu, wife to Mugithi ...
Entertainment
1 month ago