Why Masinde Muliro is awarding Mudavadi with an honorary PHD

The award will also be in recognition of the Prime Cabinet Secretary’s “exemplary service to humanity, extensive benevolence and charitable work.”

• Mudavadi has been a public servant for many years serving in six ministries.

• The university will confer the degree on December 9 at the university’s Main Campus in Kakamega during the 18th graduation ceremony. 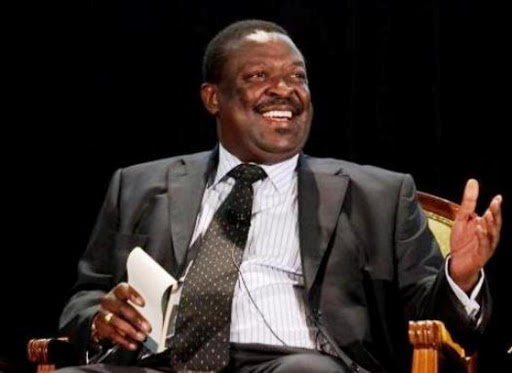 Musalia Mudavadi. he will get a honorary PhD from Masinde Muliro University.

Masinde Muliro University of Science and Technology will award Prime Cabinet Secretary Musalia Mudavadi with an honorary degree of Doctor of Humane Letters in Peace and Sustainable Development.

The university said the conferment will be in recognition of Mudavadi’s immense accomplishments in peace and sustainable development and his achievements as a person and a public officer.

It added that the award will also be in recognition of the Prime Cabinet Secretary’s “exemplary service to humanity, extensive benevolence and charitable work.”

The university will confer the degree on December 9 at the university’s Main Campus in Kakamega during the 18th graduation ceremony.

“Mudavadi is a public servant, trailblazer, diplomat and peacemaker who is now famously known as ‘a safe pair of hands’,” Masinde Muliro said in a paid advert in the local dailies.

Mudavadi has been a public servant for many years serving in six ministries. He has been Vice President, Deputy Prime Minister and now Prime Cabinet Prime Secretary.

“The apogee of his peace-making effort was demonstrated when he was named as team leader of the ODM’s side in the Koffi Annan Mediation Team during the 2007/2008 post-election violence in Kenya,” the university said.

It added that through the Mudavadi Memorial Foundation, Mudavadi has responded to many societal needs through one-on-one donations, mobilised seed capital and capacity building to nurture entrepreneurial culture among those targeted for intervention.

The university said Mudavadi has distinguished himself as a benevolent personality through humanitarian assistance “and has become an indispensable element of the force that binds people together and gives hope to many."

Ababu Namwamba joined his peers at State house for the swearing-in ceremony of the new CS's appointed by President William Ruto.
Politics
3 months ago

Musalia Mudavadi, the ANC party leader and Prime Cabinet Secretary Nominee, has revealed his net worth as he faces the Committee on Appointments for ...
News
3 months ago
WATCH: For the latest videos on entertainment stories