• Sakaja said the boy has been living on the streets for months after being abandoned.

• The boy took the opportunity to explain his plight to the governor on Tuesday. 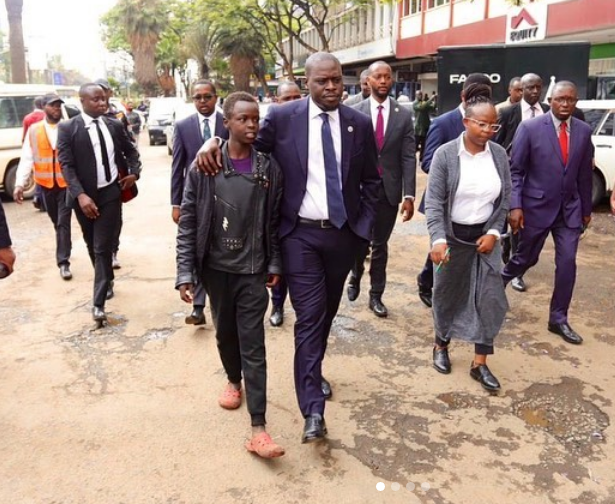 Nairobi Governor Johnson Sakaja has vowed to support a street boy and take him back to school.

During an impromptu inspection of road refurbishment works in the CBD, the boy took the opportunity to explain his plight to the governor on Tuesday.

"Ibrahim Ali. This young man touched my heart. While inspecting works in the CBD, he walked up to me and said he wants to go to school. He has now found a family and will go to school. I see a bright future," Sakaja said.

Sakaja said the boy has been living on the streets for months after being abandoned.

In the comment sections, Netizens congratulated the governor's gesture while also, while a section said the plight of thousands of such children needs a more sustainable approach.

The exact population of homeless children is unknown but those roaming the streets of Nairobi have been rising alarmingly in number over the years.

Data from Africa Volunteer indicates that Kenya has an estimated 250,000-300,000 street children, around half of them aged between eleven to fifteen years old.

Here is what Kenyans said;

Velma Kadiori: Governor should come up with some kind of kitty to sponsor many like this boy in Nairobi who would want to get an education and a livelihood but cannot reach out to the governor. This kind of Sonko style of self exhalation makes me sick.

Ludwine Kiprop: That's nice so before removing those street families in the city. Get them a place to go like shelter Homes, I’ve been feeding families in the streets of Nairobi and for sure some have nowhere to go. I met a young man called Kevin one day from Nakuru both his parents died in a road accident and the uncles had taken over there home and everything it’s really not his wish to be on the streets.

Wairimu Faith: Blessings upon you mheshimiwa, but also please do something about street families in CBD, they are too many.

Baak Dut: Absolutely amazing That’s why the people of Nairobi believe in you.Bless you and the young boy.

Remmy Wekesa Kiveu: Now, that should trigger you being in the position of power, authority, and responsibility, to develop a city policy and legal framework to take care of these street families.

Criminal gangs terrorizing Nairobi City residents have been warned by Interior Cabinet Secretary Kithure Kindiki that the government will destroy ...
News
3 weeks ago

The increase of muggings in the city has Kenyans alarmed and asking for a solution. Hawkers have notoriously taken over Bellevue, Cabanas, Transami,
Crime
3 weeks ago