• The CS was winding down his weekend in style.

• The CS loves sharing family moments online with his legion of fans. 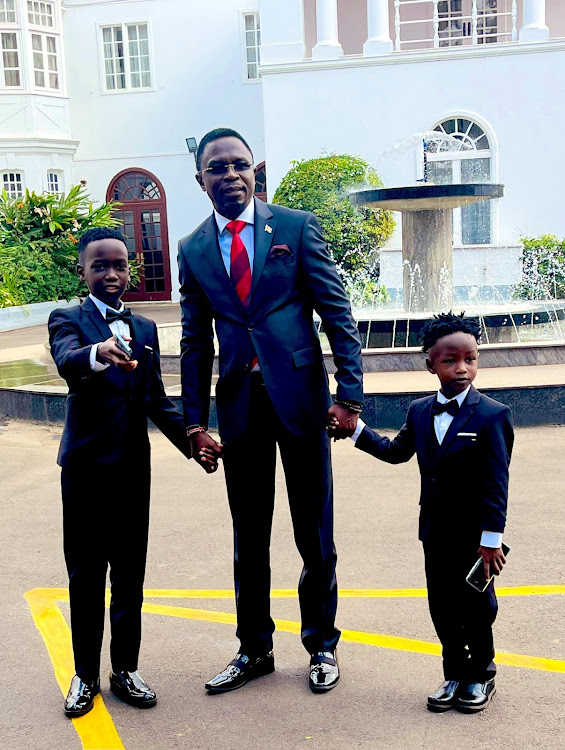 CS Ababu Namwamba shared his swag with his two adorable sons on October 27 while at Statehouse for the swearing-in ceremony of the incoming cabinet secretaries.

The CS has two boys whom Kenyans noted resembled their famous dad. He showed his easy parenting style, showing the boys around the official presidential home.

The CS this Sunday, November 14, shared a video of a cute family moment with the three dancing along to music in their lavish home.

The older son appeared to be preparing to leave for a football game as he had donned some gear. Namwamba also wore a white t-shirt and white black stripped joggers.

They were dancing along to several songs such as Shakira's song for the world cup 'Waka waka'.

The Sports CS also kicked around a balloon letting us know he can play football.

The CS almost collapsed as he tried to keep up with jigging with his youngest son. He then grabbed him and fell to the carpeted floor.

Kenyans were enthused by the video. Check out some of those comments below;

@allan_makabila·12hSuch sessions shapes the life of the young ones in a unimaginable ways, the more reason to advocate for father figures in our young boys & girls.

@MwangiMaina_·Work without play and family will be boring... Baraka waziri

@philipmlolwa·Very positive energy for the week ahead bwana CS, like it seeing you play with boys

The Sports CS has hit the ground running in his docket even reinstating the expelled Football Kenya Federation (FKF) National Executive Committee and its secretariat.

This comes just a day after Namwamba met senior Kenyan Premier League clubs officials at his office at the Kenya National Library Service in Nairobi.

Football enthusiasts are also looking forward to normallcy being restored to the sport.

Nameless took to the comment section to respond to the fan saying he is bringing up wise girls
Entertainment
3 weeks ago
WATCH: For the latest videos on entertainment stories