• Dickson said at NYS cleanliness was a big part of their training.

• Namwamba said he'd felt compelled to meet the young man due to his discipline. 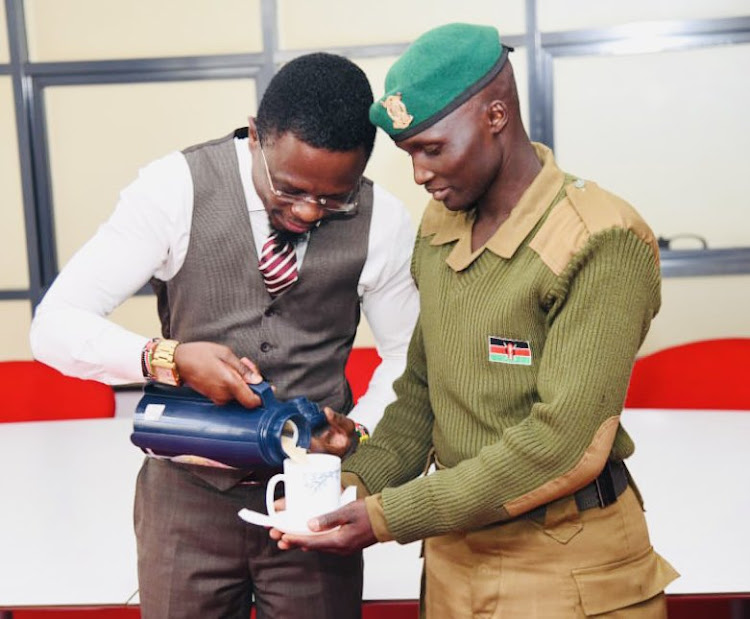 Following the mixed reactions a viral video of a young man from the National Youth Service wiping off Sports Cabinet secretary Ababu Namwamba's shoes elicited, the CS has finally reached out to the man for a cup of tea and well a job offer.

Taking to twitter to share photos of himself pouring a cup of tea for Dickson in his office the CS captioned it, "Dickson Loyerer yesterday graciously volunteered to clean my muddy shoes after a tree planting session at NYS HQ where he works.

Today we share a cup of tea in my office, where he gave me NYS tips on grooming, discipline and skills."

CS Namwamba went on to add that due to the exemplary discipline that Dickson had displayed he was looking forward to working with him in his office.

"I have requested Loyerer to join my staff." Announced the newly appointed CS.

As the CS was making his address, NYS Private Dickson Loyerer was seen wiping the CS's shoes, and when the CS attempted to stop him, he was told that it was part of the discipline that they are being taken through in their course work.

And now it seems, hours after members of the public criticized the video, the CS chose to make good by inviting Mr Loyerer to his office, where they engaged in a candid conversation.

"I want you to come to work with me here, you are an NYS officer, and I will ask the DG Matilda to allow you to work with me," the CS could be heard saying.

Mr Loyerer who comes from West Pokot while speaking with the say told him that during the parade, he realized that the CS's shoes were not clean hence, the move to bend and wipe it out.

"Niliona kuna uchafu kwa kiatu nikaamua ni lazima nitoe (I saw that there was dirt on your shoes, and I saw it fit that it must be wiped off)," Mr Loyerer told Mr. Namwamba.

He went on to state that it's their role to ensure that the place where they stay is clean.

"In case mkubwa amevaa vibaya, tunarekebisha hadi apendeke ndio akiende mahali asionekane kuwa amevaa vibaya (In case we see any issue with the boss's outfit, we fix it for him so that when he steps out he is as regal as he should look)."

The CS also lauded the management of NYS for not only teaching the youth skills but for instilling discipline in them.

Sports Cabinet Secretary nominee Ababu Namwamba has said he is worth Sh425 million.
News
1 month ago

Ababu Namwamba reveals what he loves doing away from work

Ababu Namwamba, the Chief Administrative Secretary of the Ministry of Foreign Affairs has revealed how he spends his free time away from office.
Exclusives
10 months ago
WATCH: For the latest videos on entertainment stories