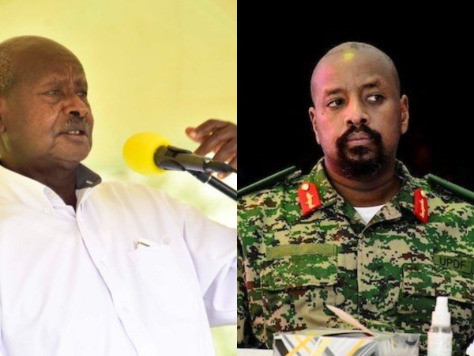 It seems Uganda’s President Yoweri Museveni isn't done being mad at his son over his stunt on Twitter and the tension he caused.

The head of state publicly announced that he had asked his son General Muhoozi Kainerugaba to leave the bird app to avoid posting on any more state affairs.

The 78-year-old president speaking in an interview acknowledged that he had not been pleased by his son's tweet thus why he and the blue app were getting sent to time out.

“He will leave Twitter. We have this discussion. Twitter is not a problem. The problem is what you are tweeting about," Museveni said.

President Museveni however did add that his son is still allowed to be on social media as long as he restricts himself to comments about sports only.

“Talking about other countries and partisan politics of Uganda is something he should not do and he will not do it.” Said Museveni sternly.

This comes two weeks after the Ugandan president was forced to apologize to Kenyans following his son's dramatic and controversial tweets where he threatened to attack Kenya and capture Nairobi.

"I am very sorry for what my son Muhoozi did, Uganda president has apologized over the horrendous tweets his son shared on social media," he said.

“I ask our Kenyan brothers and sisters to forgive us for tweets sent by General Muhoozi, former Commander ."

Museveni said it was not correct for his son to utter such remarks.

"It is not correct for Public officers, be they civilian or military, to comment or interfere in any way, in the internal affairs of brother countries,” he said.

Museveni's son, Kainerugaba claimed that it would take him, and his army less than two weeks to take control of Nairobi, the capital city of Kenya.

"It wouldn't take us, my army and me, 2 weeks to capture Nairobi.' Tweeted the 48-year-old army general .

I am very sorry - Museveni apologise to Kenyans

Yoweri Museveni, the president of Uganda, has given an explanation for why he elevated his son amidst a commotion in Kenya.
News
2 months ago

President Yoweri Museveni’s son Lieutenant General Muhoozi Kainerugaba is embroiled in a war of words with a section of Twitter after putting out a ...
Entertainment
2 months ago
WATCH: For the latest videos on entertainment stories

Here is why Kenya and Uganda are nemesis