• The Turkana MCA was captured struggling to repeat a certain Swahili word. 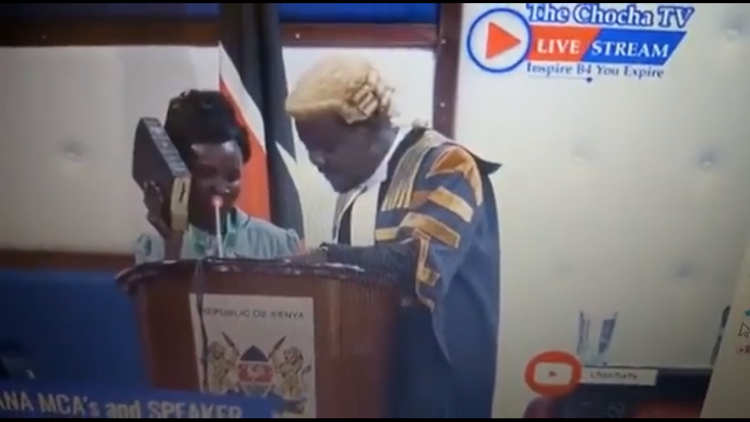 Turkana MCA The politician struggled to repeat a Swahili word during the swearing in ceremony
Image: Courtesy

Kenyans have reacted to a video of nominated Turkana MCA, Hellen Kaile, struggling to read an oath during her swearing in. Loima Sub County

The lady in question seemed to struggle in reading the Kiswahili that the officer in the county assembly was telling her to repeat.

The word she struggled with was the word, 'Nitahifadhi,' which the female MCA had a tough time pronouncing. Watch the clip below;

Imagine this is a nominated MCA in Turkana.
If she cannot repeat in SWAHILI, can she read or write anything?
Now, the residents expect her to draft and argue motions on the floor of the house where the official languages are English and Swahili. pic.twitter.com/5T1eJg4UgZ

Kenyans who saw the clip reacted to it with many wondering how she would be able to successfully represent her ward if she couldn't speak the official language.

But others were more sympathetic to the politician and defended her saying that as long as her 'Turkana' people could here, then there was no problem.

GalGalo@Galgalo23 Why now? The whole Turkana,She was the only one available?

Man in black@3000future09 I wonder how she’ll deliver

Bernard N. Kimunya Qualifications amongst them LANGUAGE kiswahili or Kizungu.

Edward Kush Mwangi They will trail back for a long time

jerotich Someone to remind me qualifications of an MCA

Jayroc Maroc jocarly Bro.turkana county leadership is the true definition of a failed leader,imagine they have voted in Christopher Nakuleu a total failure as the county assembly speaker. Turkana county is doomed

In 2017 during the campaign season, former President Uhuru Kenyatta's son, Muhoho Kenyatta was observed struggling to speak in Kiswahili.

Muhoho, who had visited Nandi County with Deputy President William Ruto, read a 30-second address on his smartphone but struggled considerably in speaking Kiswahili.

Gideon has since elevated his spoken Kiswahili and is proficient when speaking to a crowd.

What do you think? Should your elected leader speak the two official languages proficiently?

African leaders who attended the funeral ceremony of British Monarch, Queen Elizabeth II, were  on Monday seen being packed in a bus
Entertainment
4 months ago