• His deputy,, Rigathi Gachagua also took oath of office at the Kasarani stadium.

• The two gentlemen have many similarities. 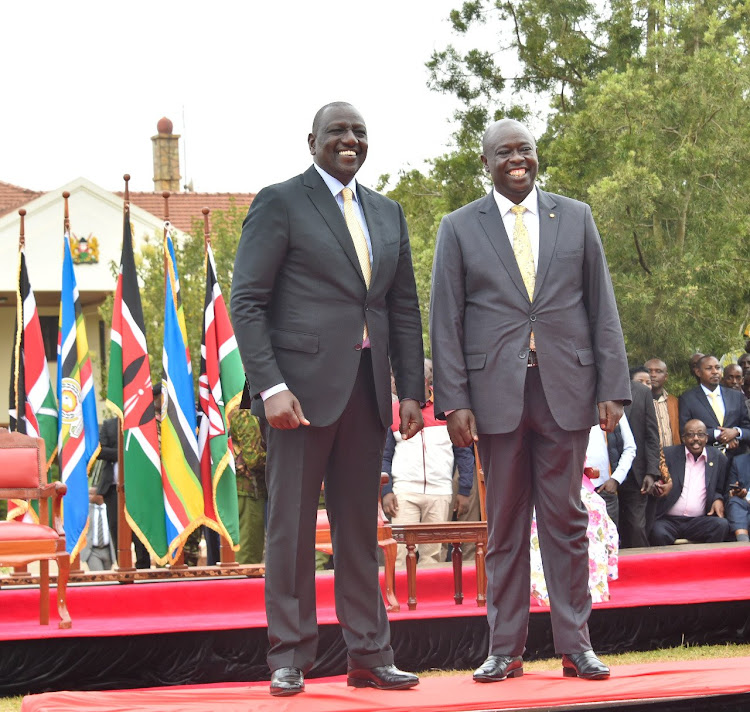 Dr William Samoei Ruto was sworn in as Kenya's 5th President in a highly anticipated ceremony at the Moi Sports Complex Kasarani on September 13th.

His Deputy Rigathi Gachagua also took thee oath of office with his boss looking on. Below are some similarities between the fifth and his DP.

1. Ruto and Gachagua have prayerful partners

The President and his Deputy both recognize the impact their wives play in their lives, not just as women but as prayer partners.

The energy and enthusiasm Gachagua exhibits towards his wife was clear to Kenyans during the swearing in ceremony in Kasarani on September 13, when he gushed about her and she shed tears about his praise.

2. They both value fatherhood

Ruto and Gachagua are fathers who publicly show off their kids.

While some politicians will shy away from ever turning up in public with their spouses and children, The President and his Deputy have no problem.

We even know their names. This tells us they are proud of their family and above all fatherhood. 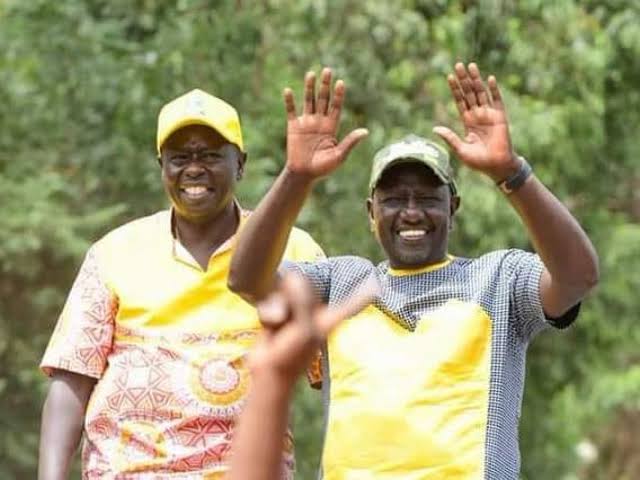 3. They are strict leaders

The two gentlemen have made it clear to Kenyans that they will hit the ground running and implement all their election pledges.

They also issued warnings that it will not be business as usual and that they expect services to be delivered to citizens. 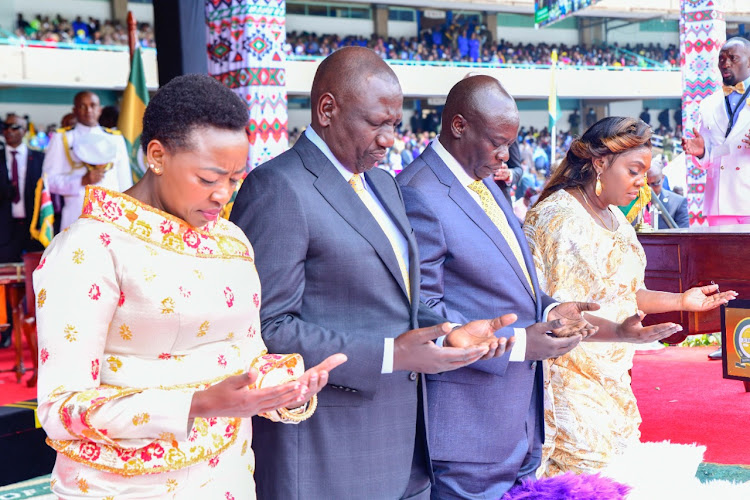 4. Their political careers have similarities

Kenyans learnt alot about Rigathi Gachagua during the election period.

The 57-year-old has so far worked behind the scenes, first as an aide in ministries and the president's office, then as a district officer, before becoming an MP in late 2017.

The same goes for the Commander in Chief who started off by selling chicken. He hustled his way up during the KANU era and became a Minister.

5. They are both influential in their respective political circles

While Gachagua hails from Nyeri, and Ruto from Uasin Gishu, the two gentlemen carry weight in their regions. For the two, mobilizing is easy for them to pull off their agendas. 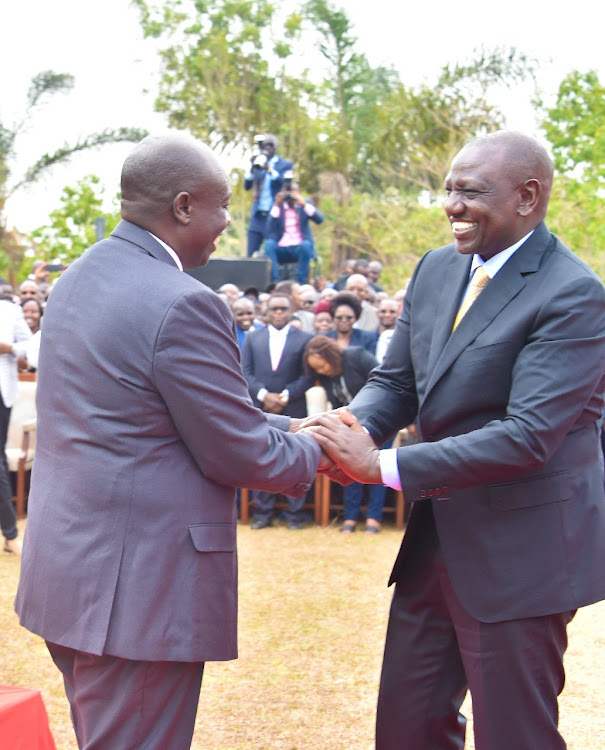 6. They have both held the DP docket

And now it is Rigathi Gachagua who is the DP of Kenya's fifth President William Ruto.

7. They both live in Karen

Ruto and Gachagua have beautiful residences in the leafy suburbs of Karen. The two live pretty close to each other.

We have since their campaign period been treated to the luxurious views of their million shilling homes.

8. They are never afraid of speaking their mind

The two gentlemen have had to repeatedly defend their sometimes controversial statements to Kenyans after going viral.

“I think the presumption of innocence and the fact that I can stand up to scrutiny and for your information, I am probably the politician in Kenya that has been audited left-right, inside-out on any matter. Maybe because I raised my head beyond what anybody think I should,” he stated.

9. They are both very monied

Their net worth became clear during the running mate debate at Catholic University when Mr. Rigathi declared he is worth sh 800 million.

Gachagua explained to Martha Karua that he made the money during his heydays as an astute businessman, that was years before becoming influential.

"My account did not receive Ksh.5 billion; that is propaganda. The money that I have is well documented. This is money I made during the reign of Mwai Kibaki when the economy was thriving. I made over Ksh.200 million and invested in an account and that account has been running for the last 8 years," he said.

On his Part, William Ruto only addressed the answer to his wealth declaring 'enough is enough' at the Presidential debate. 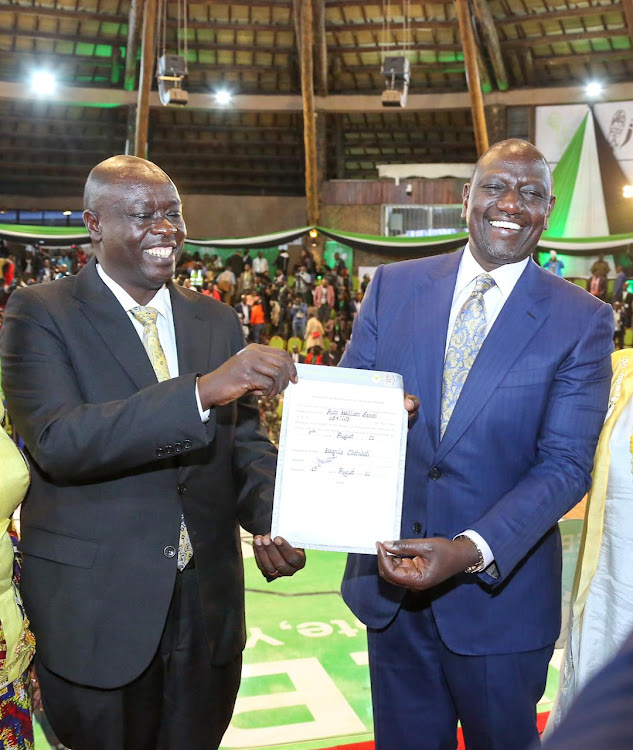 10. They are from the two ethnic communities that have produced all of Kenya's presidents

Gachagua is from Nyeri that gave Kenya its third President Mwai Kibaki, while Ruto is from the Rift Valley that produced Daniel Moi as Kenya's second President.

Dr. William Someoi Ruto has officially been sworn-in as the 5th President of Kenya.
News
4 months ago

Gachagua explains why his dressing wasn't good during the campaign season

Rigathi Gachagua, the Deputy President has told off Kenyans who have been criticizing him because of his dress code.
Politics
4 months ago
WATCH: For the latest videos on entertainment stories