Why Raila will not attend Ruto's inauguration

• Raila said he had received an invitation from William Ruto but he will not attend for reasons he stated.

• Raila Odinga said he will announce the next move his party will take once he jets back in the country. 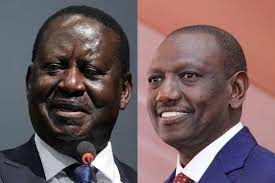 Why Raila will not attend Ruto's inauguration ceremony
Image: courtesy

In a statement, Raila said he had received an invitation from William Ruto but he will not attend for reasons he stated.

"This evening, I received a letter and a telephone call from H.E Dr.William Ruto inviting me to his inauguration set for tomorrow, September 13, 2022," the statement read.

According to Raila, the election was not fairly conducted and also the ruling of the Supreme Court was not based on the facts and the law although they accepted it.

"I regret however that I will not be available for the inauguration because I am out of the country and I also have other serious concerns.

First, I believe that the Independent Electoral and Boundaries Commission, the body in charge of our elections, did not conduct a free and fair election.

Secondly, I believe that the ruling of the Supreme Court was not based on the facts and the law, even though we accepted it.

For these reasons, the outcome of the election remains indeterminate."

Raila  who is currently not in the country, said he will announce the next move his party will take once he jets back in the country.

"Once I return to the country, I will, jointly with Azimio la Umoja One Kenya Coalition Party leaders, announce our next steps as we seek to deepen and strengthen our democracy.

We can only do so if we reform and transform the key institutions that are charged with protecting and advancing our democracy.

In the meantime, I applaud and thank our supporters and Kenyans who came out in large numbers to vote for us on August 9, 2022."

Earlier on this evening, out-going President Uhuru Kenyatta congratulated his deputy William Ruto after a meeting at statehouse.

While addressing the nation at Statehouse, President Kenyatta wished Ruto all the best ahead of his inauguration on Tuesday at Kasarani.

"My entire family and I join all Kenyans in wishing the very best to our next President Dr. William Samoei Ruto and extending to him our warmest congratulations for receiving the mandate to lead us as our fifth President." Uhuru Kenyatta said.

"Mr. President-elect, as you walk the path to your inauguration and beyond, you will be President not just for those who voted for you but for all Kenyans."

Why you should expect huge fireworks display at Uhuru Park

If you love fireworks, then make your way to Uhuru Park tonight. The Nairobi Metropolitan Service has notified residents to expect an amazing display
Lifestyle
4 months ago

William Ruto, the President-elect is at this hour meeting the outgoing President Uhuru Kenyatta at State House, Nairobi.
Politics
4 months ago
WATCH: For the latest videos on entertainment stories