The oath is required by the Constitution; the wording is prescribed by law.

• Senators-elect must swear or affirm that they will "support and defend the Constitution."

• On Thursday, former Kilifi governor Amason nKingi was elected as the Senate Speaker 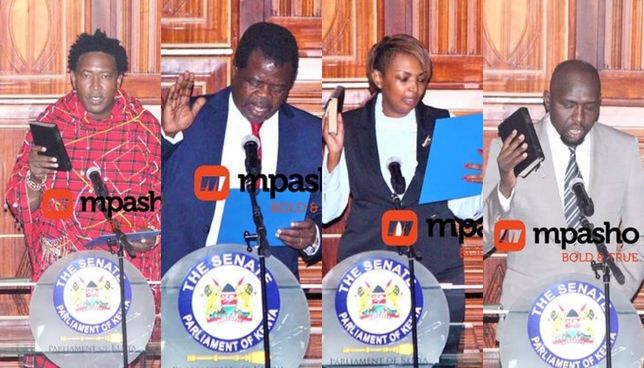 On Thursday, both elected and nominated Senators converged at the Senate Chambers to take Oath of office.

The list featured both experienced and first-time politicians who secured political seats after the August 9, General Election.

Nyamu and Maina are among officials and party loyalties who secured nominations slots to the sE Senate.

Nyamu features on the list of women who have been nominated to the Senate under the United Democratic Alliance (UDA).

Upon taking office, senators-elect must swear or affirm that they will "support and defend the Constitution."

The president of the Senate or a surrogate administers the oath to newly elected or re-elected senators.

The oath is required by the Constitution; the wording is prescribed by law.

On the other hand, 337 elected members of the National Assembly also sworn in today.

Amason Kingi, a former governor of Kilifi county, has been elected as speaker of the senate.
Politics
4 months ago

Senators allied to the Azimio La Umoja coalition walked out of the House, waving and blowing air kisses to their Kenya Kwanza Alliance counterparts.
Politics
4 months ago