Guliye said Tuju told them that it was necessary for the results to be moderated in Raila's favour.

• Guliye claims that at 2pm, an hour before Chebukati declared results, Deputy Inspector General of Police Noor Gabow went to the holding room and informed him that a team from NSAC had arrived at the tallying centre and wanted to meet Chebukati.

• Chebukati was busy at the time but he indicated he would convene a brief meeting with the commissioners at 2 pm regarding the final results and to listen to the visiting team. 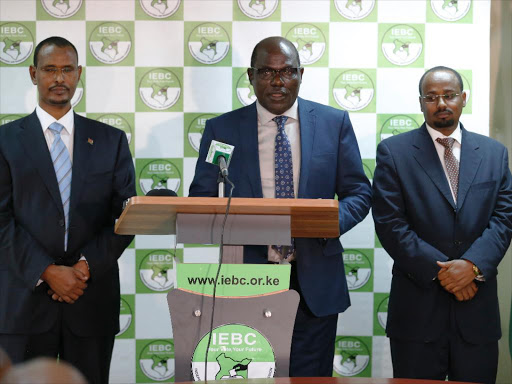 In an affidavit by Commissioner Abdi Guliye, he claims that the security committee was led by the Principal Administrate Secretary in the office of president Kennedy Kihara, Solicitor General Kennedy Ogeto, IG Hillary Mutyambai and vice chief of defence forces lieutenant general Francis Omondi Ogola.

Guliye claims that at 2pm, an hour before Chebukati declared results, Deputy Inspector General of Police Noor Gabow went to the holding room and informed him that a team from NSAC had arrived at the tallying centre and wanted to meet Chebukati.

Chebukati was busy at the time but he indicated he would convene a brief meeting with the commissioners at 2 pm regarding the final results and to listen to the visiting team.

At the meeting, Kihara relayed their message that if the commission declared Ruto as president-elect ‘the country is going to burn’.

According to Guliye, Kihara proceeded to indicate that skirmishes between the Kikuyu and Luo communities had already started in several slums including Kibera and Mathare on the basis of alleged betray by the Kikuyus.

“Kihara proceeded to caution us that if we proceeded with the declaration of the results with Ruto as president-elect and chaos erupt, ‘then the blood of the dead Kenyans’ will be on our hands,” Guliye said.

The second message from the NSAC delegation was that if we cannot announce Raila as the outright winner, then we must ensure there is a run-off.

After Kihara concluded his remarks, Chebukati invited us to share our views, the four dissenting commissioners were the first to comment and said the message warrants serious consideration.

They supported the adoption of the communication with the delegation “ before taking a decision as to the results to be announced”.

“I on the hand said that the commission has a constitutional mandate to fulfil and in declaring the result it will be guided by the same constitution,” Guliye says.

Chebukati at the same time said they had an oath of office which required fidelity to the constitution.

After the delegation left at 3 pm, CEO Marjan Marjan walked in with the final results and handed a copy to all the commissioners and the four commissioners protested and insisted the results should be changed in the light of the NSAC delegation communication.

Masit and Wanderi, were of the view that the results should be pushed towards a rerun which in their view would be a win-win situation.

Cherera then suggested the margin is not too big and could be manipulated by moving 233,211 votes from Ruto to the rejected ballots category.

“Having heard the views of all the commissioners the chairman. Indicated he would not discuss the subversion of the will of the people and he would announce and the declare the final results in accordance with the verified tallies” the affidavit states.

Regarding the 27 constituencies, Guliye says the results had already been verified in the presence of agents of the candidates and included in the final tally in form 34C.

He further claims that earlier in the day at 3am on the morning of August 15, Raphael Tuju, former senator Amos Wako and Advocate Kyalo Mbobu visited IEBC chair Wafula Chebukati.

At the meeting, Tuju told Chebukati that it was necessary for the results to be moderated in favour of Baba and that any contrary declaration of results would plunge the country into chaos.

“He suggested in the event it was not possible to declare ‘baba’ as the president-elect then the commission should force a run off. He indicated that should his request be granted it would be adequately rewarded,” Guliye claims.

Senator Wako said they had come to ask the commission not to operate in a vacuum and that it must consider the link between the election results to be declared and the stability of the country which he described as the bigger picture.

According to Guliye, Wako proceeded to indicate that in his term as attorney general he also served as the election supervisor and in that capacity, he would moderate results guided by the need to achieve law and stability in the country.

“Having heard the sentiments of Tuju and Wako, the chairperson invited the commissioners to comment. Commissioners Cherera, Nyang’aya, Masit and Wanderi agreed with the remarks of both Wako and Tuju”

Guliye however, did not agree with what was going on saying he did not know the outcome of the elections at that point and any such discussion was unwelcome.

Chebukati on the other hand said we would respect the will of the people and announce the results as per the final tally from all the polling stations.

Juliana Cherera, the Independent Electoral and Boundaries Commission vice chair has filed a response to the presidential election petition
Politics
1 month ago

Wafula Chebukati, the IEBC Chair met a host of leaders affiliated with Azimio la Umoja coalition on the morning of the day the Presidential results
Politics
1 month ago

Wafula Chebukati has allegedly removed all the other commissioners from the commission's WhatsApp group.
Politics
1 month ago
WATCH: For the latest videos on entertainment stories