Mutyambai said from August 26, he will be away from the office attending to a medical checkup.

• It is the first time under his term for Mutyambai to delegate his mandate.

•“This is to inform the general public that I will be away from the office attending to a medical checkup effective today, 26th August 2022.” 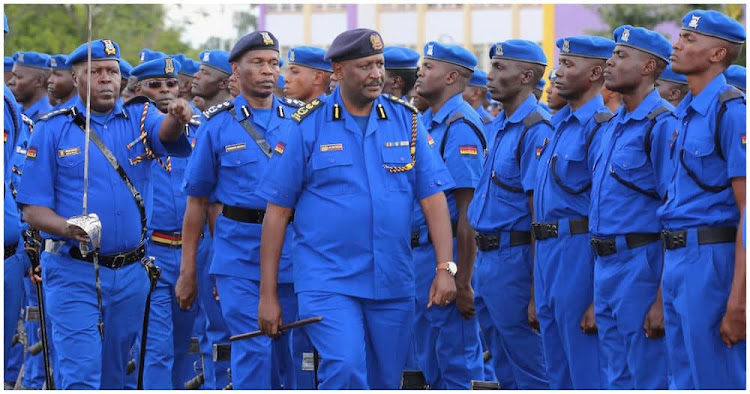 Hillary Mutyambai during a police parade

After being ill and being admitted to the hospital, Inspector General of Police Hilary Mutyambai has designated his deputy Noor Gabow to take over as the police chief.

From August 26, according to Mutyambai, he would be out of the office undergoing a medical examination.

“This is to inform the general public that I will be away from the office attending to a medical checkup effective today, 26th August 2022.”

It is the first time under his term for Mutyambai to delegate his mandate for medical reasons.

Gabow is not new to the position as he is from the general duty and it will be easy for him to manage the police operations for now.

This came amid reports that Mutyambai was Thursday rushed to hospital after he collapsed at his Nairobi home.

The officer was in his Karen residence when he complained of difficulties in breathing and collapsed.

His escort team had dropped him home earlier on and was preparing for Friday’s work.

His wife and workers raised alarm and sentry officials joined in rushing him to a high-end private hospital for treatment.

The HDU is a specialist ward providing intensive care (treatment and monitoring) for critically ill people.

A relative and friends of the senior police officer said the patient was responding well to treatment.

It is not clear what caused the incident.

President Uhuru Kenyatta’s era as the 4th President of Kenya is almost over after Kenyans went to the ballot to elect his successor on August 9, 2022.
Politics
1 month ago

3 Kenyans who should be considered for the Education docket

On Monday August 22, Magoha while addressing the press told that whoever takes over from him should not focus on office work solely.
Entertainment
1 month ago

Toto as she is popularly referred to told Jeff Koi9nange in an interview on Citizen Tv that hers si a story of inspiration.
Entertainment
1 month ago

Zari: My boyfriend is not young