Ahmednasir explains why he can't represent Ruto in Supreme Court

"I want to, but I can't act for President-Elect," Ahmednasir

• In a statement on Sunday night, the lawyer said he wants to, but he is conflicted. 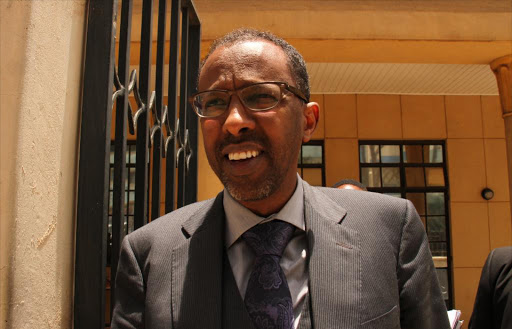 Kenyan lawyer Ahmednasir Abdullahi has come out to explain why he is not allowed to represent President-elect William Ruto in the presidential petition filed at the Supreme Court.

In a statement released via his social media pages, Ahmednasir says that he wants to represent Ruto but unfortunately he is conflicted.

The prolific lawyer explained that he represented President Uhuru Kenyatta against Raila Odinga in the 2017 presidential election petition and the two former foes are now allies.

He explained that Uhuru can object to the move citing a breach of clients-Advocate privilege.

"I want but I can't act for President-Elect Ruto in the Supreme Court. I'm conflicted. In 2017, I acted for outgoing President Uhuru against Hon Raila. Now that Uhuru's project (Hon Raila) is challenging Ruto's victory obviously Uhuru will object & raise clients-Advocate privilege," Ahmednasir said in a tweet.

He, however, noted that he will run a Twitter commentary on the strengths and weaknesses of the case that will have been filed by Raila Odinga.

He added that he will also predict the possible outcome of the Supreme Court verdict on the same.

"Starting kesho (tomorrow), I will run a Twitter commentary on the Supreme Court petition that will be filed by Hon Raila. I will appraise the strength and weaknesses of the case, the responses by the respondents, and jurisprudential clues we should look for from the 7 judges.  Will predict the decision."

This comes at the backdrop of reports that Ahmednasir will be part of the battery of lawyers that will represent DP Ruto in the presidential petition.

Others said to be on the team include; Fred Ngatia, Adrian Kamotho and Nelson Havi among others.

Azimio presidential candidate Raila Odinga is expected to petition at the Supreme Court on Monday by 2 pm.

Musa Ogendo did not plead to the charge after the court deferred the plea to Monday next week.
Crime
1 month ago

Being a lover of expensive automobiles, Grand Mullah does not allow anyone to drive him, he drives his own cars.
Politics
1 year ago