Rachel Ruto and her husband William met in college

• Rachel Ruto refused her teaching job since she was getting married and the job was far from her husband.

• Rachel said she did not know William Ruto would end up in politics. 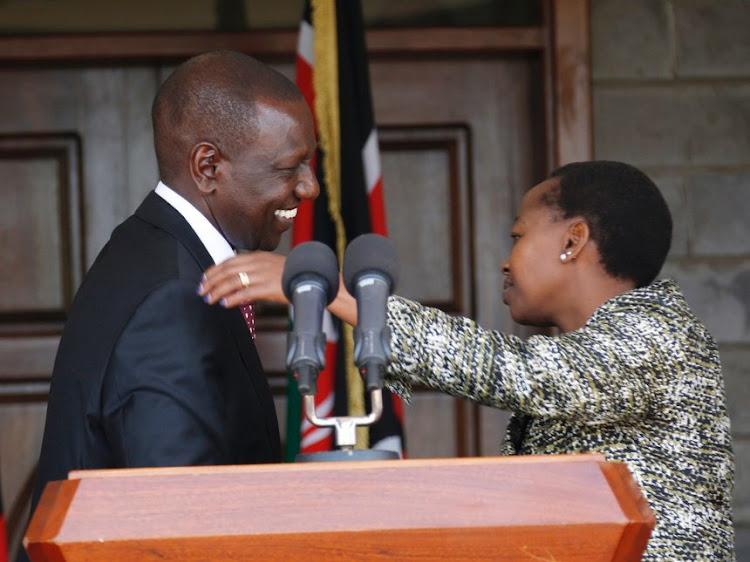 Rachel Chebet Ruto and President-elect William Ruto have been married for over 30 years now and their love story dates way back.

The two met while in college over 30 years ago, she fondly calls her husband Bill.

Rachel in an interview of Woman without Limits with Rev Kathy Kiuna talked about how God revealed to her that she was going to get married to William Ruto in a dream.

The mother of six said, while in University, she started praying for a husband and God revealed his name in a dream.

The next day after the dream, the now President-elect William Ruto proposed to her.

"I used to pray for my future husband and at one point at night God gave me the two names that I would get married to him (William Ruto). That was during my teaching practice times," she narrated.

"The next day, I was learning how to play the guitar from a friend's house. My roommate came and told me that I had a visitor, I was like, who that was?" she said.

William had come to visit me and that was a confirmation that it was him. He was not supposed to be in Eldoret," she said.

Rachel said her roommate left her with her then-boyfriend as she did not have an afternoon class.

"I was left with him (Ruto) in the room feeling very uncomfortable without knowing what to do. He then told me he had something to tell me and that was the day he proposed to me."

Rachel promised to pray about it and the rest is history.Despite doing education, Rachel didn’t get a chance to practice teaching for long.

She told Kathy Kiuna that she was posted to a school that was a bit far from where she was at the time.

"I didn't go since I was planning to get married," she said.

"I decided to get a job in Nairobi and at one point I resigned to take care of my children because of the pressure of balancing between being a mum and a wife."

Rachel said she gave her life to Christ when she was in High school as a form one student.

"Getting saved propelled me to other levels," she said.

She narrated that her childhood was not as easy as her parents were farmers in the settlements in Likuyani.

She said she seriously wore shoes when she joined to form one because it was a requirement. Her husband William Ruto was her first man in her life.

"I started dating at KU after meeting a wonderful man," she said.

"I had known my husband since childhood. I knew him from the church when we would go for youth camps. He was an active church person."

She said she is glad she got married young.

"I got married immediately after KU at the age of 23 years. I have never regretted getting married young. It's good to enjoy the young life in your marriage. I have six children."

Rachel said she did not know her husband would end up in politics.

"I remember one time during our courtship, he asked if I knew I was getting married to a politician and I was like, where is this coming from? I thought it was a joke."

Rachel has been instrumental in assisting her husband's campaign, often seen by his side when he was seeking office.

'To the universe and beyond,' Bensoul gushes as he wishes Noni a happy birthday

These female politicians switch up their look alot but on several occasions have maintained short hair that sheare even made into small locs.
Politics
1 month ago
WATCH: For the latest videos on entertainment stories