• Ruto said he called Raila in the morning and they talked about how they would move the country ahead during an interview at the Bomas of Kenya.

• The departing Deputy President made it clear that he supported a government that is free to carry out its duties without interference. 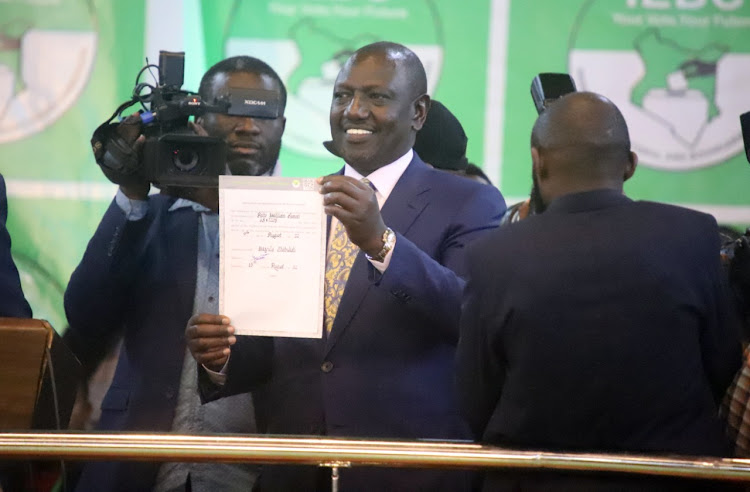 Before being named the victor of the August 9 General Election, Raila Odinga was in contact with President-elect William Ruto, it has been discovered.

Ruto said he called Raila in the morning and they talked about how they would move the country ahead during an interview at the Bomas of Kenya on Monday, August 15.

"Maybe I should disclose that this morning I called my opponent, Raila Odinga and we agreed regardless of the outcome of the elections, we should have a conversation," Ruto stated.

"He had offered in his statement in Kasarani that he would be available for a handshake and I said that I will be available for us to have a cup of tea because there are areas we can agree on moving the country forward," he added.

He nevertheless reaffirmed his prior position that he did not believe in the handshake, citing the issues he encountered in his administration under President Uhuru Kenyatta.

"In the context of those of us who will be running the executive, I am sure my competitor and his team will take up their role as the opposition, so that we can see how we can move the country," the president-elect affirmed.

The departing Deputy President made it clear that he supported a government that is free to carry out its duties without interference.

He did, however, add that his administration would be inclusive and would provide for all Kenyans, despite their political views. He acknowledged that he had not spoken to President Uhuru, but he insisted that they will eventually meet.

"I am sure at some point this evening or tomorrow (Tuesday) we will have a conversation. I am the president-elect and there has to be a transition. In that transition there will be a conversation," Ruto affirmed.

The outgoing DP responded to queries by assuring the media that there was no animosity between him and the Fourth Estate and that his effort for fair coverage was not motivated by personal animosity.

Ruto's Kenya Kwanza campaign attacked the media for perceived bias in the run-up to the election. He also denounced the pandemonium at the Bomas of Kenya, which he attributed to his opponents trying to undo the progress made.

Diamond's message to Kenyans after Ruto was declared the President-elect

Diamond Platnumz has sent a congratulatory message to Kenyans after the Presidential results were announced today evening.
Entertainment
1 month ago

William Ruto has thanked Kenyans for upholding peace during the entire period, saying they have jointly with the candidates raised the bar.
Politics
1 month ago

Wafula Chebukati , the IEBC chairman now says two of his commissioner and IEBC CEO are injured and currently receiving treatment in hospital.
Politics
1 month ago
WATCH: For the latest videos on entertainment stories

Rigathi's sons and wife show up to support him