• Churchill and Sakaja have been friends over the years with the comedian even interviewing the politician for his popular Churchill Show.

• Churchill had nothing but nice things to say about the governor-elect. 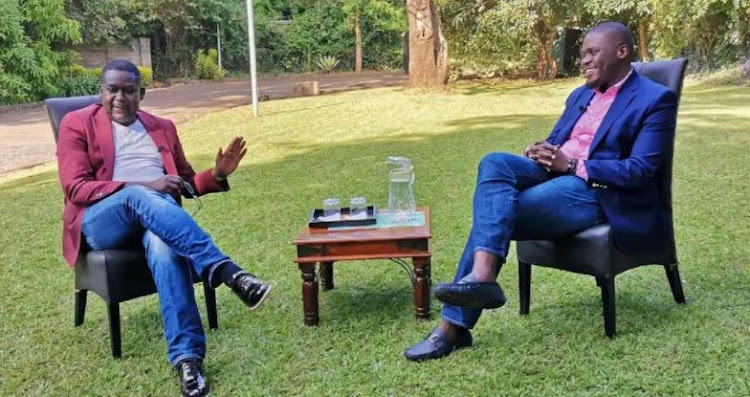 Johnson Sakaja with Churchill Ndambuki together in a file photo
Image: Facebook

Churchill espoused that Sakaja was the right man for the Nairobi governorship.

"I'm glad Nairobi has for the first time in history Msee ako tops anaweza sema anawalombotov. The Youth have won in you...Nairobi’s dreams and aspirations now look more real with you at the helm."

He finished his message by praying that Sakaja's reign as the Nairobi governor would be a successful one.

"May the same God you’ve served deligently guide you in propelling the green city in the Sun to even greater heights.We celebrate you (Sak).😁Baraka kibao."

Interesting thing is that Sakaja's hopes of becoming the leader of Kenya's biggest county as far as revenue collection goes were almost not realized.

This was because of the thorny issue of whether the charismatic leader had gotten a legitimate degree, a condition for a candidate running for a gubernatorial seat.

The intrigues involving his degree dragged out for many weeks so much so that even the Uganda authorities got involved.

This was after Sakaja claimed that he had gotten his degree from a university located in the pearl of Africa.

Johnson had to even go to the courts to force the issue, with the courts ending up siding with him and allowing him to be on the ballot.

Let us hope and pray that Churchill's assertion that Sakaja is the right man for the job holds up, considering the poor performance of last two governor's Nairobi elected.

The 2022 general elections are around the corner. Among those who have aroused the interest of Kenyans is none other than Roots Party Candidate ...
Politics
1 month ago

Eric Omondi was recently interviewed by Presenter Ali on his YouTube page. The comedian opened up about some areas of his life.
Entertainment
2 months ago
WATCH: For the latest videos on entertainment stories

All about Sakaja's wife and kids