Presidential results from IEBC at 6:30 p.m

Piece by: The Star

• The commission must verify all the 290 Forms 34Bs plus the diaspora results before declaring winner of the August 9 presidential election. 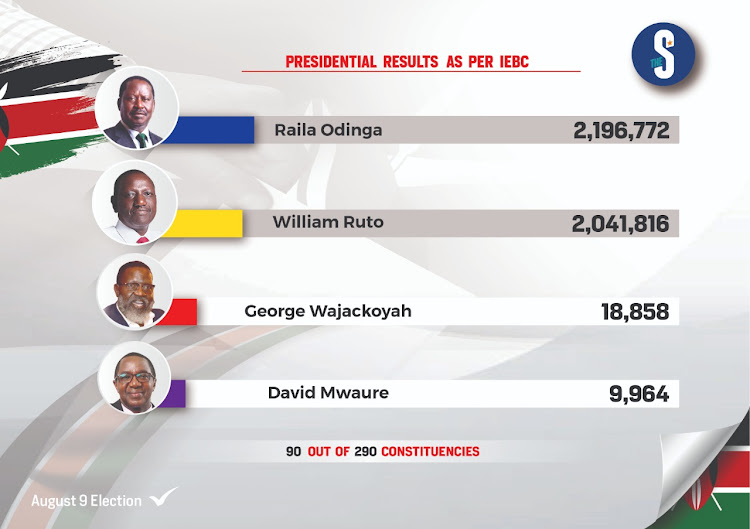 The presidential results at the moment

The Independent Electoral and Boundaries Commission (IEBC) on Thursday started verifying Forms 34B which contain presidential results as announced at the constituency level.

The commission must verify all the 290 Forms 34Bs plus the diaspora results before declaring the winner of the August 9 presidential election.

This must be done within seven days after the voting day.

Meanwhile, the Independent Electoral and Boundaries Commission has revised the verification of the votes to make the process quick.

Speaking on Saturday, IEBC chairman Wafula Chebukati said that they had observed that the process was taking between 3 to 4 hours to clear one returning officer.

He noted that some ROs had been at the National Tallying centre for three days, and had not been cleared.

"We review as follows, ROs on queue to hand over original results to National Returning Officer immediately after this announcement," Chebukati directed.

He added, "The ROs go to the ICT desk for verification of forms 34As against transmitted forms 34As."

He noted that some 265 ROs had reported at the National Tallying Centre. Out of this, 141 ROs have been processed, while 124 ROs are still in the queue.

Chebukati said that presidential agents will be given copies of forms 34As and Forms 34Bs for their own use.

"We believe this will fasten the process," he said.

Rigathi Gachagua, William Ruto's running mate, has claimed that the Azimio la Umoja team is holding up the verification of Forms 34A and 34B
Politics
1 month ago

Martha Karua, the Azimio la Umoja running mate has urged Raila Odinga’s supporters to hang in there as IEBC continues to tally the votes.
Politics
1 month ago