Simba Arati won the seat with a landslide 270,928 votes

• The Kisii governor-elect Simba Arati was  flanked by his wife and former Kisii senator Sam Ongeri at the Kisii County Tallying Centre. 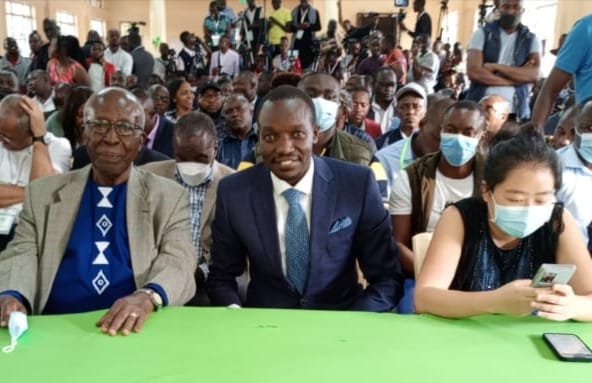 While at the Couinty tallying centre to collect his certificate, the picture of a Chinese woman seated next to him caught KOT's attention.

The Kisii governor-elect Simba Arati was  flanked by his wife and former Kisii senator Sam Ongeri at the Kisii County Tallying Centre at Kisii Polytechnic on Friday, August 12, 2022.

Arati was in the gubernatorial contest alongside Infrastructure CAS Chris Obure (Jubilee), Sam Ongeri (DAP-K) Manson Oyongo (KNC) Ratemo Onchiri (USAWA) and Bishop Josiah Onyancha (Independent) who all got in the lows of hundreds across all wards.

In his victory speech, Arati said he is ready to work with all his competitors in building the county.

"We have won, let's now work together, you were worthy competitors," Arati said.

Only Senator Ongeri who vied on DAPK party ticket turned up to witness the results declaration exercise and congratulated Arati.

Arati received his certificate in the presence of enthusiastic supporters at the Kisii Polytechnic county tallying centre.

The former legislator thanked voters and members of his campaign team for standing with him and handing him a resounding victory.

"I thank my deputy, Robert Monda, Senator Onyonka for their sterling efforts. With you, we overcame all and I promise we will go far together," he said.

Throughout his campaigns, Arati championed the cause of the poor and his resolve to confront graft.

He promised to seize by the collar people privatising public wealth and hand them to jailers.

Arati, the son of peasants from Nyamache in Bobasi, tells tales of struggle and poverty and struggle to reach where he is today, a journey of unbowed hope.

Roots Party presidential candidate George Wajackoyah was Thursday campaigning in the Central Business District during the day.
Politics
1 month ago
WATCH: For the latest videos on entertainment stories