Didmus Barasa's sister distances herself from his alleged murder drama 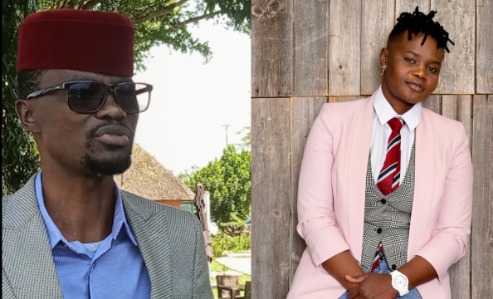 Finland based Kenyan artiste Rawbeena, sister to Kimilili MP Didmus Barasa has asked to be distanced form his drama.

This was after the politician allegedly shot an aide to his opponent dead at a polling station.

" I would like to say that I respect him. I treat him like my brother because he has played a parent role in my life.

I do not want to be associated with a post I did months ago because of elections.

I am sorry for what happened but I am very far from Kenya. All we can do is to ask to help the bereaved family."

Rawbeena says he has been focusing on life.

She does not want to be dragged into her brother's drama based on a post she did a long time ago.

"I want people to focus on my music instead of my personal life.

A post I shared was misquoted,people say I called my brother stingy. People should respect my family. I do not know what has happenned so I cannot discuss this issue.

My family is going through a lot of things. The law will follow it's due course.

I do not want to be associated with this drama."

Rawbeena sent her condolences to the bereaved family adding that God will help justice take it's due course.

The incident involved Barasa and his rival Brian Khaemba of DAP at Chebukwabi polling station where they were to witness the counting of votes.

Bungoma head of DCI Joseph Ondoro said an altercation broke out between the two prompting Khaemba to leave and headed to his car.

“Barasa followed him in the company of four men and ordered them not to allow him(Khaemba) to leave the place but Khaemba's driver Joshua Nasokho defied the order and ignited the vehicle,” said Ondoro.

It was then that Barasa drew a pistol and aimed at Khaemba's aide Brian Olunga and shot him in the forehead killing him on the spot, a police report indicates.

He was pronounced dead on arrival at Kimilili sub-county hospital.

Barasa allegedly shot the man on the forehead killing him on the spot according to a police report.
Politics
1 month ago

'...was the slap from electricity?,' MP Didimus asked artiste

"This is politics," adding, "When you say I have slapped you then you go to court with a bandage on your arm, was the slap from electricity?" Didmus ...
Politics
1 year ago

Members of the public were treated to rare drama when Didmus Barasa and the local musician and contractor Kay engaged in a scuffle.
Politics
1 year ago
WATCH: For the latest videos on entertainment stories