How to avoid spoiling your vote tomorrow

The election will see Kenya usher in a new leadership as a country, after President Uhuru Kenyatta's 10-years rule.

• According to Election Regulations, a spoilt ballot is not a vote at all and does not count towards turnout. 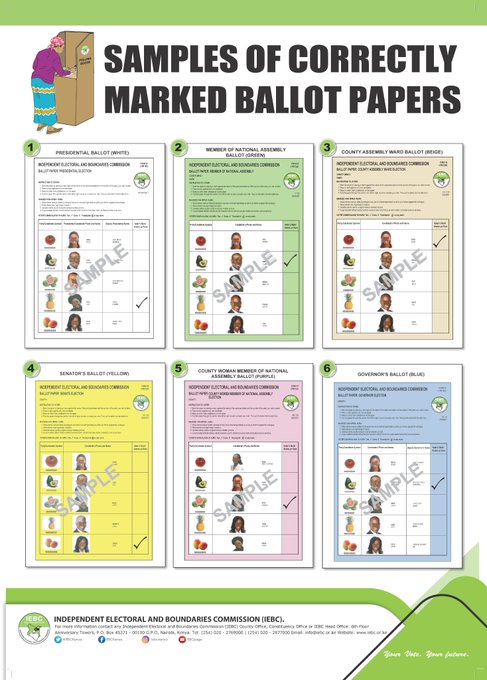 Tomorrow, Kenyans will be heading to the polls to choose leaders who will represent them for the next 5 years.

The election will see us usher in new leadership after President Uhuru Kenyatta's 10-years rule. In Tuesday's election, 22,120,458 voters will be expected to cast their votes, including 7,483 prisoners and 10,444 voters in the diaspora.

This has been named a high stake election and also one of the most highly contested in the country.

Despite this, the issue of spoilt votes continues to be a thorny issue when deciding who has won an election.

In the 2017 presidential election, the IEBC announced that 403,503 votes were spoilt. Lack of civic education and lack of assistance by IEBC officials has been highly attributed to this.

According to Election Regulations, a spoilt ballot is not a vote at all and does not count towards turnout.

However, we will take you through steps on how not to spoil your vote;

However, if a voter spoils a ballot paper they may be given another ballot paper but this cannot be done more than twice.

Raila will make his final pitch at the 60,000-set Moi Sports Centre, Kasarani, while DP William Ruto will stage his last rally at Nyayo National ...
Politics
4 months ago

Bahati- I have spent 33 million on campaigns

Bahati urged his supporters to vote for him and Raila Odinga as president.
Entertainment
3 months ago