• Ruto was dressed in a  white shirt, black colored trousers, and a white and black cap representing UDA colors.

• Rigathi also had a white shirt with yellow coloured patches and a Kenya Kwanza cap. 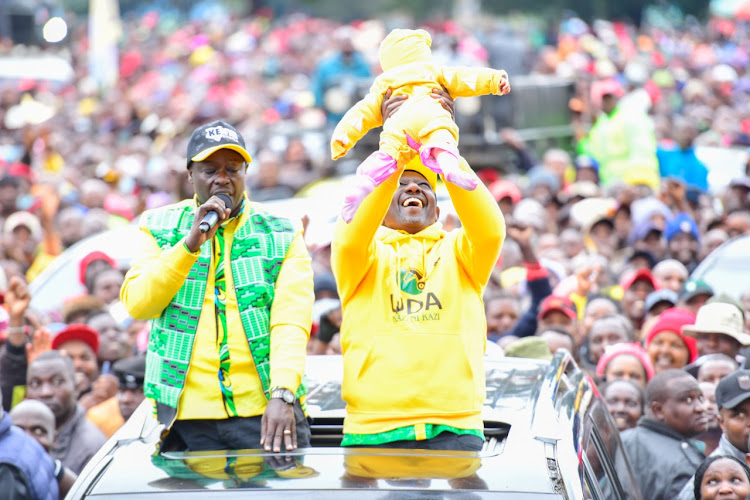 Kenya Kwanza Presidential team has arrived at Nyayo stadium for their final rally.

The duo, Deputy President William Ruto, and his running mate Rigathi Gachagua made their way to the stadium shortly after 2:45 pm to a warm reception from thousands of delegates who painted the venue with yellow color.

Yellow is the main color of the Ruto-led United Democratic Alliance( UDA) Party.

Making their way to Nyayo stadium the duo were escorted by hundreds of supporters as their vehicles made an entrance into the stadium.

The supporters had carried posters of Ruto,  others carried wheelbarrow posters,  and small yellow flags while others blew whistles.

Ruto was dressed in a  white shirt, black colored trousers, and a white and black cap representing UDA colors.

Rigathi also had a white shirt with yellow colored patches and a Kenya Kwanza cap.

Following them behind were the Kenya Kwanza principles, led by Musalia Mudavadi.

Making an entry into the arena, Ruto and Rigathi made a round around the stadium as 'UDA  and Ruto ' slogans were chanted.

David Waihiga Mwaure, the Agano presidential contender, has presented a list of Kenyans who have been suggested to join his government if he
Politics
3 days ago

Roots Party statement on Wajackoyah endorsing Raila- "We would like categorically state that we have a presidential candidate who is on the ballot ...
Politics
4 days ago

On Monday, President Uhuru Kenyatta slammed William Ruto once more, calling him "evil and a robber," and advising his Mount Kenya
Politics
5 days ago
WATCH: For the latest videos on entertainment stories