• Benjamin Washiali was seen fightig of police who were trying to frog-march him into a waiting police vehicle.

• The reason for his arrest is still unclear with some saying that he had allegedly damaged public property. 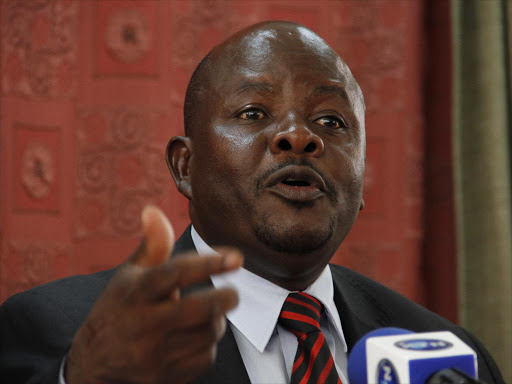 Benjamin Washiali at a past press conference
Image: The-Star

The crazy and dramatic arrest of Benjamin Washiali, a member of parliament for Mumias East, an MP closely allied to Deputy President William Ruto has divided Kenyans.

The politician, a point person for the DP in Western Kenya, was seen being handled roughly by anti-riot police personnel wearing combat gear on Saturday, July 30.

The lawmaker, who was wearing a yellow T-shirt to show his support for Kenya Kwanza, was cuffed by a group of policemen as he protested asking why he was being detained.

The legislator was pulled to a waiting police car during the chaos, which lasted for many minutes, but he refused to get in.

Washiali was allegedly detained for inspecting Bukhungu Stadium the day before a Kenya Kwanza protest set for Sunday, July 31, something allies of the DP refuted. Watch the video below;

Kenyans who saw the video were divided with a large number upset with the force used by the police while others felt that the politician had made the incident more dramatic than it should have been.

Another commenter even added that they thought it had been stage-managed.

Wambua🇰🇪 This is uncalled for mbona wasimwambie tu we are arresting you for one, two mistake I think ni mp he knows the laws he'll comply rather humiliating him all this way

Cavin Apodo #Workplace Chronicles Not to say this is good, but contrasting it to a common mwananchi makes the politicians sound like they should be treated in some special manner? Everyone is a common mwananchi before the law. I don't know who was wrong between the mp and police though.

Kamongo Today you realize the importance of peace and tolerance?Compare with most of your tweets always inciting others and pushing for meaningless harsh tags

Davedee On this one I beg to disagree, why should anyone resist being arrested. politicians feeds on drama for political mileage. If he can just cool down and demands to be taken to a legally established police station to be charged for whatever the offense, there would be no drama.

Geoff Mutai K. We condemn this barbaric act by the members of the policy service, it is unacceptable and IPOA should look into it.Hon.Wasiali as shown that he is not a weakling.

Sura ya Mganga It looks like the stage-managed. This is not the police I know how they carry one within a second u have boarded without ur wish. Hizi ni vipindi tu

Rigathi Gachagua, the UDA presidential running mate now says his life is in danger. The politician claims that some people have been trailing his
Politics
1 week ago

Kenyans react to video of Wajakoyah being sexually harassed

The Roots Presidential candidate, George Wajackoyah was yesterday the victim of inappropriate touching by a person while on the campaign trail.
Politics
1 week ago
WATCH: For the latest videos on entertainment stories