• The agreement he signed has brought into the mix Nairobi Senator Johnson Sakaja, who is eyeing the Nairobi governor seat and UDA Mombasa governor candidate Hassan Omar.

• The ex-governor revealed that he will now be campaigning for Sakaja for the Nairobi Governor seat and drop his bid for the Mombasa governor seat. 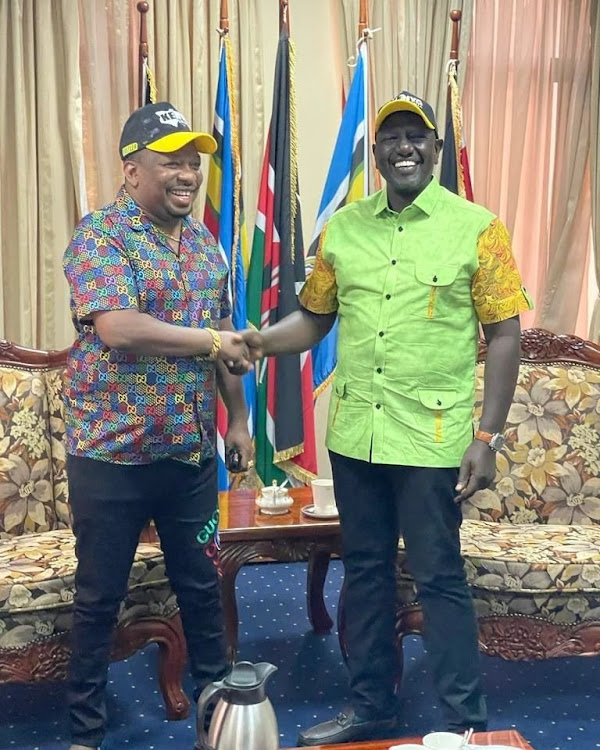 Former Nairobi Governor Mike Mbuvi Sonko and Deputy President William Ruto have signed a contract outlining the posts he will receive from the Kenya Kwanza administration.

As a result of the agreement he signed, Hassan Omar, a UDA candidate for governor of Mombasa, and Nairobi Senator Johnson Sakaja, who is vying for the position of Nairobi governor, have entered the mix.

For the position of Nairobi governor, Sonko had previously endorsed Igathe. As a result, the DP has promised the former governor four ambassadorial postings, three principal secretaries, and one cabinet secretary if he wins the August 9 election.

The new deal's details come after the DP announced that the governor had joined the Kenya Kwanza team.

"We welcome Mike Sonko to Kenya Kwanza, the winning team," Ruto wrote on Facebook on Saturday.

The move comes two days after Sonko said he will not back the ODM candidate Abdulswamad Nassir for the Mombasa governor seat.

Sonko while reacting to the High Court ruling that upheld the decision not to clear him demanded the IEBC to allow his running mate Ali Mbogo to vie for the governor seat.

He said if the wiper candidate is not on the ballot, he will not support Nassir.

He warned that he will instead back UDA's Hassan Omar for the Mombasa governor seat.

“It’s not about Sonko. Clear Ali Mbogo and let him be on the ballot, failure to which we shall support Hassan Omar. Take this to the bank,” he said.

On Thursday, the former governor lost a bid to have his name included in ballot papers for the Mombasa gubernatorial race.

He had petitioned the High Court to compel the Independent Electoral and Boundaries Commission to include him on the ballot.

However, a three-judge bench dismissed the argument of Sonko that he has an active appeal at the East Africa Court of Justice.

The court agreed with IEBC’s interpretation of the Supreme Court ruling that had found him constitutionally unfit to hold office.

The child maintenance lawsuit against former Nairobi Governor Mike Sonko has been dropped. The woman explained that she had dropped
Politics
1 week ago

Conjestina Achieng's son thanks Mike Sonko for helping her mum
Politics
1 month ago
WATCH: For the latest videos on entertainment stories