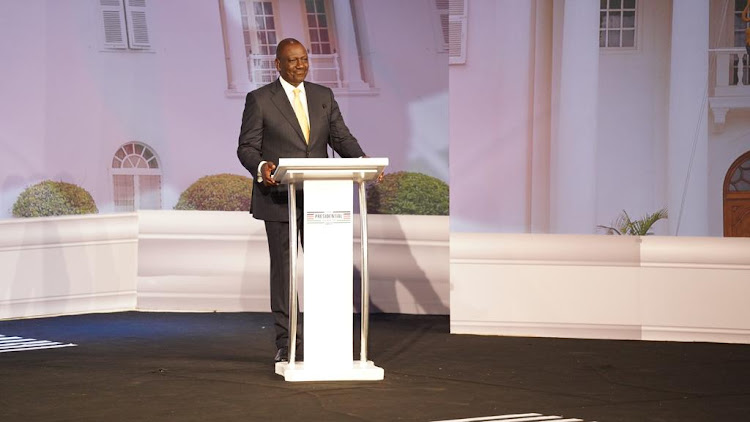 Mr. Ruto came sharply dressed in a black suit and yellow tie. Mr. Ruto was asked about his record in Mr. Uhuru's government in a debate that is still ongoing in the link here.

The eagerly anticipated presidential debate is taking place at the Catholic University of East Africa in Nairobi with the event being live-streamed on all TV and radio stations.

The debate was set up to be held in two tiers, each involving two presidential contenders, according to the Presidential Debate Secretariat's timetable.

Two candidates for the presidency, however, expressed their doubts and said they wouldn't show there.

George Wajackoyah, the candidate for the Roots Party, alleged unjust treatment in his argument that all four candidates ought to take part in the same debate and refused to attend the first tier.

Raila Odinga, the candidate for Azimio la Umoja One Kenya, on the other hand, announced that he will instead host a televised public event at Jericho Social Hall with his running mate Martha Karua.

William Ruto, the leader of the Kenya Kwanza, and David Waihiga Mwaure, the candidate for the Agano Party, were the only candidates left to participate in the discussion.

The presidential discussion will be moderated by five prominent journalists. They include; Joe Ageyo (NTV), Smriti Vidyarthi (NTV), Ken Mijungu (KTN), Yvonne Okwara (Citizen TV), and Eric Latiff (Spice TV). For both debates, Ageyo will preside over the panel discussions.

Smriti and Mijungu would moderated the tier one debate featuring candidates whose popularity in three recent opinion polls stood below 5 percent. Those were Wajackoyah and Waihiga.

The second debate for the two leading contenders -Raila and Ruto - is being moderated by Yvonne and Latiff. Diplomats from 24 countries are expected to attend the debate.