• Waihiga Mwaure was all alone on stage as Wajackoyah refused to attend the debate.

• Waihiga offered some opinions that most Kenyans saw positively. 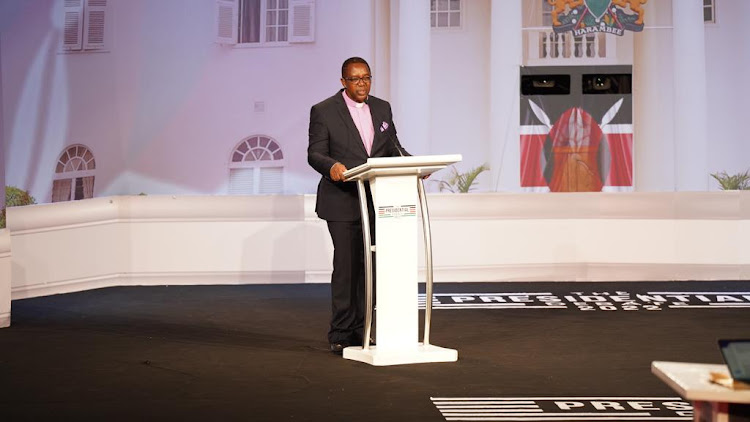 Despite the absence of Roots Presidential candidate George Wajackoyah, the lawyer was able to present his manifesto which was largely rooted in honesty and integrity.

Mwaure also said that his competitors have nothing new to offer the people of Kenya and that his opponents have been in government and could have done what they are currently promising.

"They have been there before. One of them has been deputy president and still is deputy president of this republic, he is in government. The things he is saying he can do, he could have done the last 10 years," he said.

"The other one is a former prime Minister, co-president. The things he is promising are things he could have done. He's been in this race for the last 40 years."

Mwaure noted that he still believes Wajackoyah is part of the government.

He promised that he will combine his experience being an advocate and a man of the clothe to help benefit Kenyans.

And how was the reaction from Kenyans? Most of the comments from Kenyans on Twitter were positive with many praising his thrust was largely based on morals and good conduct.

But there were some who felt that he had no real solutions and should stick to the pulpit. Check out some of the comments below;

Phefumula (SOBNS) Thank you David Waihiga for answering when Kenyans called, the phone rang and you picked, we will rethink about our votes. We salute you, you are a gentleman we need. Now, let's wait for another gentleman called Ruto. Those who answer deserve our votes.

Ian Mutevu@mutevu While we may appreciate how challenging thinking on one's feet is, David Mwaure Waihiga is continuously broadcasting his ignorance by directing every solution he gives to money he will source from he knows where.

Vanessa Ngunjiri@van_njiri David Mwaure Waihiga has expressed himself nothing short of clearly and elaborately in this debate at least to a decent capacity that Kenyans can appreciate. Do we believe in his theory of a redemptive leadership as Kenyans? Thoughts thought thought!

Mc katululu@Mc_katululu Am listening to waihiga and all I can say is let that guy stick to preaching.

Lelinka Ezekiel Oloitiptip David Waihiga mwaure is a spontaneous combustion leader,he has re embassed and emphasized that he's the real deal.A combination of a lawyer and a Cleric . He's equal to the task. I wish you well man.