Rigathi came prepared with the word of the day

• He accused them of using state power to benefit private enterprise. 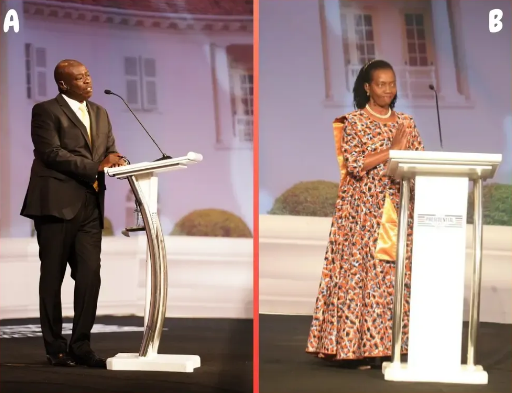 Speaking during the last session of the running mates debate, Gachagua said the current Government has failed Kenyans in the fight against corruption and resulted in harassing those supporting other candidates.

These were Rigathi Gachagua's words in describing state capture, "Those in power competing with citizens for scarce resources, where the people in power use their position to advantage themselves to get business unfairly where people in power allocate resources to projects where they have an interest."

He went ahead to accuse Azimio of using public funds to fund their campaigns. Mr. Rigathi accused Kenya’s first family of state capture, accusing them of using state power to benefit private enterprises.

The family is involved in businesses including banking and agriculture. Kenya Kwanza Alliance running mate Rigathi Gachagua says that they would deal with state capture and conflict of interest among Government officials if elected in August.

On the other hand, Karua referred to state capture as corruption cartels that had strangled various sectors of the economy and accused Mr. Gachagua of misunderstanding the real meaning of the word.

In our research, we have found that state capture is a type of systemic political corruption in which private interests significantly influence a state's decision-making processes to their own advantage.

The term 'state capture' was first used by the World Bank (c 2000) to describe the situation in central Asian countries making the transition from Soviet communism.

Specifically, where small corrupt groups used their influence over government officials to appropriate government decision-making to strengthen their own economic positions, these groups would later become known as oligarchs.

Allegations of state capture have led to protests against the government in Bulgaria in 2013-2014, and have caused an ongoing controversy in South Africa which started in 2016.

The classical definition of state capture refers to the way formal procedures (such as laws and social norms) and government bureaucracy are manipulated by private individuals and firms so as to influence state policies and laws in their favour.

State capture seeks to influence the formation of laws to protect and promote influential private interests. In this way, it differs from most other forms of corruption which instead seek selective enforcement of already existing laws.

State capture may not be illegal, depending on the determination by the captured state itself, and might be attempted through private lobbying and influence.

The influence may be through a range of state institutions, including the legislature, executive, ministries, and the judiciary, or through a corrupt electoral process.

It cannot be discovered by lawful processes, since either (or all) the legislative process, judiciary, electoral process, and/or executive powers have already been influenced and subverted by the private special interests.

A distinguishing factor from corruption is that, while in cases of corruption the outcome (of policy or regulatory decision) is not certain, in cases of state capture the outcome is known and is highly likely to be beneficial to the captors of the state.

Also, in cases of corruption (even rampant) there is plurality and competition of 'corruptors' to influence the outcome of the policy or distribution of resources.

Mammito and Njugush went political with a parody of this week’s deputy presidential debate showcasing how funny Gachagua and Karua behaved.
Entertainment
3 weeks ago

Karua faced off with Kenya Kwanza deputy presidential candidate Rigathi Gachagua in the second part of the presidential debate that lasted 90 minutes.
Politics
3 weeks ago
WATCH: For the latest videos on entertainment stories